“When Did You First Know You Wanted to be a Stand-up Comic?” by Marvin Thompson 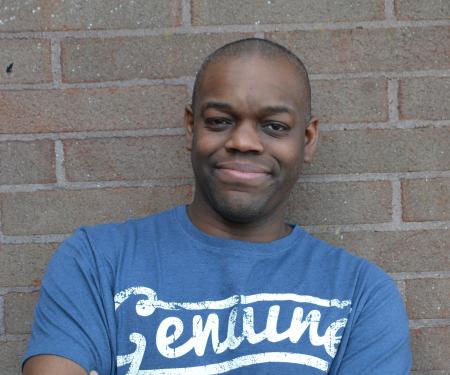 “The sun has got his hat on. Hip. Hip. Hip,”
is what Gramps drawled during drives to sea air
where throats were eased from hayfever’s rough grip.
Those days kicked off by Gramps’ Art Deco leer;
in shorts and Yankees cap he’d yawn or scowl
and switch from Dad’s dub to Radio 3.
Then in old Jamaican patois he would howl:
“Watch the road. Stop trying to kill me!”

The taunting tone was a game for us three;
how long could we cork up our wild cackling?
I’d mimic Gramps till our Adam’s apples jigged.
“You’ll be a stand-up star,” Gramps said hoarsely.
I’d smell his grave’s rain-wet soil, wondering
if I’d one day honour him with Vegas gigs.

Marvin Thompson was born in London to Jamaican parents and now teaches English in mountainous south Wales. He has an MA in Creative Writing and was one of three poets selected by Nine Arches Press for the Primers 2 mentoring scheme.

Reviewers of the Primers 2 anthology described his work as “exciting,” “dramatic,” and “a virtuoso performance.” Other publications include The Poetry Review, Poetry Wales, and Red (an anthology of poems by Peepal Tree Press). In 2017, Marvin Thompson won third place in Ambit magazine’s international poetry competition. In 2019, his magical-realist war poem, “The Many Reincarnations of Gerald, Oswald Archibald Thompson” was submitted by Long Poem Magazine for the Forward Prize for Best Poem.

“Their skin evoked Britain’s colonial past and something in me blew . . .” Marvin Thompson’s debut collection provides a refreshing perspective in times when “Brexit turned tongues profane.” We hear a Black British poet speaking from the Welsh countryside, but his is no ordinary poetry of place. The Welsh woodlands provide the perfect canvas for Thompson’s interrogation of heritage and identity. He writes with a wry lyricism, demonstrated by delicious titles like: “Whilst Searching for Anansi with my Mixed Race Children in the Blaen Bran Community Woodland.” There is vulnerability here as a son mourns for his father, and a Black father grapples with the challenges of educating his Mixed Race children in Wales. Drizzle is a recurring motif, as Thompson confronts the after-effects of empire and how our colonial legacy shapes our present and future by drizzling the poems with past and present day casualties of empire, ranging from Jamaican Maroons, to Grenfell, Mark Duggan and Broadwater Farm, where “rage spread like an Arab Spring.” And closer to home he asks, “Will Britain learn to love my children’s melanin . . .” Road Trip is a beautifully crafted collection that speaks through a range of striking personas and combines formal grace with some wildly inventive narratives. These poems are elegiac, haunting, sardonic, and completely necessary for this new decade. – Malika Booker, author of Pepper Seed

Amy Glynn's Poem "The Rape Of Proserpina" Appears in the Latest Installment of Ernest Hilbert's Cocytus: A Dark Web Magazine