“Two Portraits” by Ernest Hilbert in the Southwest Review 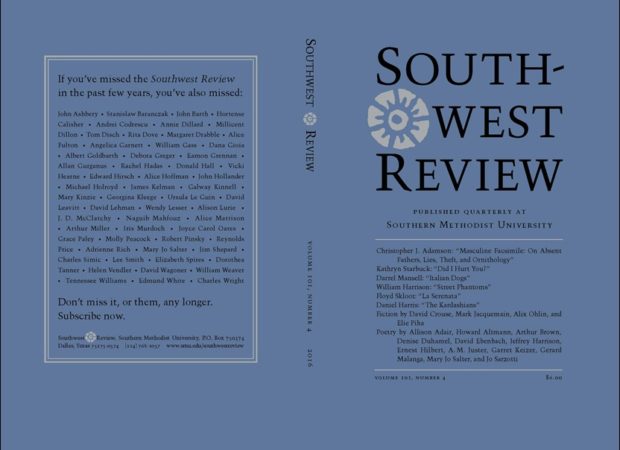 My poem “Two Portraits” appears in the new issue of the Southwest Review alongside poems by Denise Duhamel, A.M. Juster, Mary Jo Salter, Gerard Malanga, and others. Follow the link to subscribe and read.

Two portraits lean on their stands and watch me.
The first frame, stained dark cherry, nicked pink
At its edges, clasps Dürer’s engraving,
“St. Jerome in his Study.” The bearded saint,
Bald and intent, gazes down on his own work,
Never aware of me, as a dog and human-
Faced lion doze beside his slippers.
The image’s coppery scintilla comfort me.

Light breaks from his pate like a borealis,
Serene as the light through his window.
The glass becomes a pool that swims
With reflected light, his study rippled under
Clear water, near enough, almost, to touch,
Like a drowned royal grave filled with sparks
And traces of an imagined world.

The other frame, cheap rusted metal, cocked,
Holds a fading black-and-white photograph
Of my father, raising me, a blond boy
Before a piano and a long board
Chalked with staves: Old melodies and high notes,
A wall of trills and delicate runes like
The antechamber of an ancient tomb.

The notes run up and up from left to right
Disappearing behind the great bear-form
Of my bearded father in striped tie and tweed.
He cups his big hands beneath my small legs.
Through his glasses—they reflect
The room and hide his eyes—
He watches me at my work.

The portrait once shone like a coffin set on end,
Dimming in time, depths flattened,
Still empty of its intended occupant. Ernest Hilbert’s debut poetry collection Sixty Sonnets (2009) was described by X.J. Kennedy as “maybe the most arresting sequence we have had since John Berryman checked out of America.” His second collection, All of You on the Good Earth (2013), has been hailed as a “wonder of a book,” “original and essential,” an example of “sheer mastery of poetic form,” containing “some of the most elegant poems in American literature since the loss of Anthony Hecht.” His third collection, Caligulan (2015), has been called “brutal yet beautiful,” defined by “pleasure, clarity, and discipline,” “tough-minded and precise,” filled with a “stern, witty, and often poignant music,” “a page-turner in a way most poetry books can never be.” His fourth collection, Last One Out, will be published by Measure Press in 2018.

His poems have appeared in Yale Review, American Poetry Review, Harvard Review, Parnassus, Sewanee Review, Hudson Review, Boston Review, Verse, New Criterion, The New Republic, American Scholar, Hopkins Review, Oxonian Review, and the London Review, as well as several anthologies, including the Swallow Anthology of New American Poets (2009), The Incredible Sestina Anthology (2013), nd two standard Penguin classroom anthologies, Poetry and Literature (both 2011 with later editions since). He graduated with a doctorate in English Language and Literature from Oxford University, where he edited the Oxford Quarterly. While there, he studied with Jon Stallworthy—biographer of Wilfred Owen and Louis MacNeice and editor of the Norton Anthology of Modern Poetry—and James Fenton, then Professor of Poetry at Oxford. He later served as poetry editor of Random House’s magazine Bold Type in New York City and head editor of Contemporary Poetry Review, published by the American Poetry Fund in Washington DC.

Hilbert supplies opera libretti and song lyrics for contemporary composers Stella Sung, Daniel Felsenfeld, and Christopher LaRosa. His most recent opera with Sung, The Book Collector, premiered at the Schuster Center in Dayton, Ohio in May 2016, with full orchestra, combined 3D and traditional sets, and ballet, made possible by New Music USA, the Andrew W. Mellon Foundation, the Aaron Copland Fund for Music, the ASCAP Foundation, and the Francis Goelet Charitable Lead Trusts. Hilbert is as a senior literature specialist at Bauman Rare Books in Philadelphia, where he lives with his wife, Keeper of the Mediterranean Section at the University of Pennsylvania Museum of Archaeology and Anthropology, and their son, Ian, who was born in December 2015.

0
"A Song for New Year's Eve" by William Cullen Bryant
"The Muse and the Auctioneer’s Gavel: Learning About Poetry from First Editions" by Ernest Hilbert