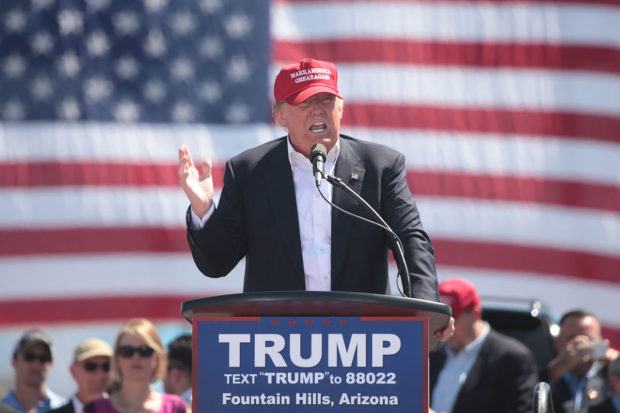 Where there is no love in a relationship, even the way a man holds his fork annoys you; where there is love, he could eat off the floor and you wouldn’t mind. On that basis, you’ll notice that there is a lot of criticism and discussion in the press about things connected with president Trump and food. Personally I don’t care how he eats, though some have tried to ascribe great meaning to his eating habits. But anyway, here are five things the press has mentioned about Trump and food and the meaning imparted to his choices.

3. He likes eating at McDonald’s (and other fast food places) because, as explained in Fire and Fury: “He had a longtime fear of being poisoned, one reason why he liked to eat at McDonald’s—nobody knew he was coming and the food was safely premade” (p. 84).

2. For my money the clearest sign that he’s a sociopath: He commissioned a complex cake design for one of his inaugural balls to look exactly like a cake at one of Obama’s inaugural balls, but with one key difference: at Obama’s inaugural ball the multi-layer cake, a salute to the nation’s military, had a different flavor cake for each layer for the enjoyment of the attendees, but Trump’s cake was a fake cake made of Styrofoam covered in fondant with the exception of one piece of cake for Trump to eat. What kind of psychopath makes a huge cake for a big party and has a big presentation for all of the attendees where he slices the cake while everybody watches, but then he only allows himself to eat it while his guests have to look on, cakeless??? Even Marie Antoinette said “Let them eat cake.” Trump won’t even let them eat cake! Pure psychopathy.

1. Trump gets a special menu when dining with guests at the White House, rather than getting the same menu as everyone else. For example, he gets a Diet Coke while everyone else gets water; he gets Thousand Island dressing and everyone gets creamy vinaigrette; he gets two scoops of ice cream and everyone else gets one scoop; and he gets an extra side of sauce for his chicken beyond what everyone else gets. This goes towards his demonstrated desire for consistency and control. It’s pretty standard at meals of this kind for people to be given a standard menu, so it’s not strange that they don’t get the same options he does. Though it’s also been demonstrated that he likes to control other people and make them do what he says, like when Chris Christie came over to dine and Trump ordered the meatloaf for Christie, no choice offered. Extra: the famed Resolute Desk in the Oval Office now has a special button that Trump can push to get someone to bring him a Diet Coke.