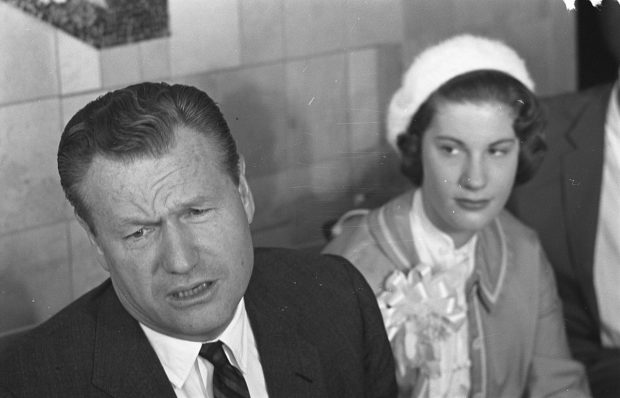 Hey, wanna be a member of a rich old robber-baron family? Sure you do. Unless you can summon the spirit of the classic American song “Sunny Side of the Street”:

Now if I never made one cent
I’ll still be rich as Rockefeller
There will be gold dust at my feet
On the sunny
On the sunny, sunny side of the street

Most people would rather be rich as Rockefeller than walk in the sun. Think it’s loads of fun to be part of a rich family? Well, think again. Check out some of these unfortunate bits of information about the Rockefeller family.

5. Michael Clark Rockefeller, son of future vice-president Nelson Rockefeller, was almost certainly eaten by cannibals. 26 year old Rockefeller was an aspiring anthropologist, particularly interested in the artwork of remote tribes. He traveled to Dutch New Guinea to live with the people there for about six months. At one point, he traveled up the coast in a catamaran with a few others to visit a different tribe. The catamaran capsized, and Rockefeller decided to swim to shore for help. That is the last word we have of him, though had he stayed put, he would have been rescued along with his companion, when help came the next day. As it was, he was a strong swimmer so most likely made it to land. Unfortunately, the land closest to the catamaran was known to be inhabited by a tribe that practiced cannibalism. A search failed to turn up the wealthy socialite, but, according to word from local missionaries, Rockefeller was killed and eaten as part of ritual revenge against the killing of five members of the local tribe by Dutch police a few years earlier. We will never know for sure, but you can learn more in the documentary The Search for Michael Rockefeller (2011), or the book Savage Harvest: A Tale of Cannibals, Colonialism, and Michael Rockefeller’s Tragic Quest (2014). the anthropologist in me thinks that reports of cannibalism are typically greatly exaggerated—there are far fewer cannibals than there are reports of cannibalism. But this one seems authentic.

4. Then, there’s Clark Rockefeller, scion of the powerful family . . . or not. “Clark Rockefeller” was really a German con man by the name of Christian Gerhartsreiter, who copied the moves and voice of Thurston Howell III from Gilligan’s Island, then used his mad millionaire skills to pass himself off as an illegitimate member of the family, his mother having been, he claimed, an actress who had an affair with a Rockefeller. He was able to live for many years quite comfortably, with companies throwing jobs and money at him, clubs begging him to join, seemingly everyone happy to pay for his bar tab and for the checks at restaurants. He was also aided by the money and car he got by killing at least one, most likely two people, and his big payday came when he convinced a VP at McKinsey and Co., who had a salary of more than $1 million/year, to marry him and pay for all of his indulgences. No amount of incompetence or eccentricity seemed to make people the least suspicious, and he was only caught in the end because he tried to kidnap his daughter. After the arrest, the Rockefeller family publicly disavowed any knowledge of him, and someone finally bothered to check out his story only to learn it was BS. He’s currently in prison for murder.

3. Brothers Nelson and David Rockefeller spearheaded the building of the World Trade Center in New York, twin towers to be permanent monuments in New York City to two great brothers. And they were indeed great, anchoring lower Manhattan and being unmistakable landmarks to the city. But it did not end well.

2. Nelson Rockefeller died while having sex with his mistress, Megan Marshack. Not much else to say there. Is it embarrassing, or is this a winning way to go?

1. The charitable Rockefeller Foundation does a lot of good now but has a shady past. During the 1930s, the foundation supported eugenicist Nazi research. Literally. I’m not just invoking Godwin’s Law. They gave money to Nazi researchers who were exploring the efficacy of sterilizing the mentally ill and proving that Jews were inferior. These ideas were explained in the regular reports to the foundation, but they didn’t use that information to alert others to the plans.