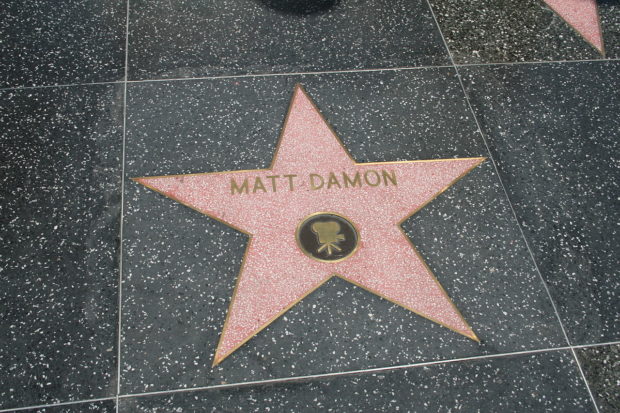 The movie The Martian is coming out October 2, 2015. Slight spoiler (just about what is in the trailer, which you can see here and here). It is based on the novel The Martian by Andy Weir. During one of the first manned missions to Mars—technology is roughly what we have today, so everything feels familiar—one of the astronauts is accidentally left behind on the planet. Basically, during a fierce dust storm, it’s thought he’s dead, and the other astronauts can’t find his dead body, and the danger of continuing the search is too great. But he’s not dead, and the rest of the book describes his efforts to survive on Mars, jury-rigging his scant supplies, until the next manned trip arrives in four years. The movie stars Matt Damon as the astronaut, and it’s directed by Ridley Scott, which makes this his third science fiction film (the other two being Blade Runner and Alien). It may be a good film. But it made me notice that Matt Damon has a bad habit of getting into trouble and then having like a whole movie full of people drop everything to try to save him. I mean, jeez, can’t this guy manage to stay out of trouble? Let’s look at what we’ve got.

Good Will Hunting (1997): Matt Damon himself kicked off this trend of having people save him when he penned the story of a genius who was born on the wrong side of the tracks and, since no one recognizes his genius, becomes an MIT janitor. When his brilliance is discovered, a whole lot of people drop whatever they’re doing to expend a lot of effort to save him, including Robin Williams’s psychiatrist, who helps him to recover from abuse and neglect, Minnie Driver, who shows him love, and Stellan Skarsgard, who becomes his mathematics mentor. But he rejects them all because he can’t handle it, and seeks a return to his friends . . . including Ben Affleck.

Saving Private Ryan (1998): When this movie was filmed, Damon was an unknown actor—Good Will Hunting had not yet been released. He plays the titular private, who is being sought by a squad of men in the midst of the D-Day landings. They resent having to drop everything and leave the battle to find him and take him to safety. The Army wants him found and returned from the front because his three brothers were all killed in separate military actions and it is thought his death might hurt public morale (a mother would lose all four of her sons in one week to the war). When the soldiers finally find him, the ungrateful wretch rejects their rescue, preferring to remain with his own squad.

Dogma (1999): In this Kevin Smith classic, Damon plays an angel who wants to get forgiveness, die, and enter heaven by walking into a church, in an act that will give him forgiveness for his earlier disobedience, as well as ending the universe as we know it. Confused? Don’t be. It’s just Kevin Smith. So of course a whole group of beings, mortal and immortal, mobilize to move heaven and earth to find and stop him: a demon, Jay, Silent Bob, Metatron, Chris Rock, a Muse, various other critters, and of course, Bethany. Damon is, of course, ungrateful and useless.

Interstellar (2014): Earth is doomed. Again. There’s just enough time and technology for one more exploratory trip through a wormhole. The mission is to find another planet that is inhabitable by humans. As part of the mission, they must go and see if they can find, yes, Matt Damon, who it turns out has gotten into trouble and needs rescuing once more! He is the sole survivor on one of the planets, and the explorers drop everything to go find Damon, who, as usual, is ungrateful and ready to destroy the last hope for humanity.

0
"Lightning Bugs" by Kevin Durkin
"Never More Will the Wind" by H.D.