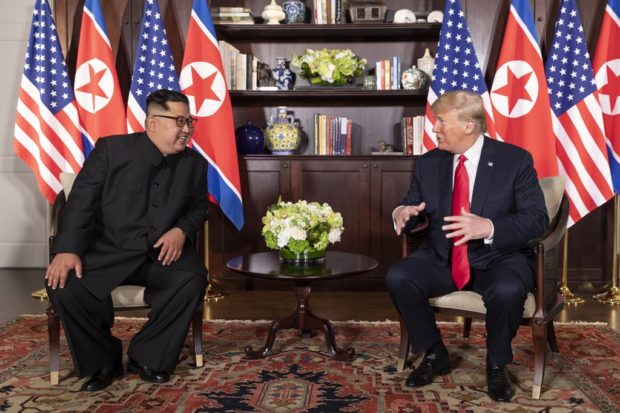 Kim Jong-Il, the Dear Leader of North Korea, passed away in 2011, but his memory lives on. He is the star of movies like Team America, World Police and the producer of films like Pulgasari, a Godzilla-like monster movie directed by and starring South Koreans whom he kidnapped expressly to make the film. In other words, he was a bold and decisive leader as well as patron of the arts. And now, he reminds us of a new American leader, Donald Trump. The two share some important traits, as described here.

It’s as if Kim’s hair is so impressed with Kim, that it needs to stand at attention on the top of his head.

Trump’s hair, too, rises to the occasion, defying gravity itself to acclaim the greatness that is Trump! But Trump’s hair is much more than that. Here, his hair hovers above his head like a nimbus embracing the heights of the sacred Mt. Fuji.

Kim Jong-Il’s son Kim Jong-Un seems to be vying for the hair style champion of the 21st century, though. But maybe he’s just using as his inspiration the hairstylings of the imperial class of the Centauri, as shown on Babylon 5:

4. Inherited his fortune from his father: Both men were handicapped in life by having a father of wealth and power, forcing them to overcome the stigma of being born rich in order to forge their own accomplishments. Tough, right?

Kim Jong-Il became leader of the world’s only hereditary communist dictatorship in 1994, where he soon distinguished himself by becoming the world’s largest customer of Hennessy Cognac, and presiding over a famine that saw the death by starvation of hundreds of thousands to millions of North Koreans. Upon his death in 2011, his son then became leader of North Korea, leapfrogging in succession over an elder brother who was the favorite until he embarrassed his father by being caught trying to sneak into Japan to visit Tokyo Disney.

Trump inherited something between $40 to $200 million dollars from his real-estate-mogul father, having leapfrogged into leadership over his elder brother, who was an alcoholic who drank himself to death, leading Trump to be a teetotaler. He then used the money from his father’s company to buy up real estate during the 1970s when New York was bankrupt and properties were at their lowest value since about forever.

3. Loves naming things after himself: Many things in North Korea are named after Kim Jong-Il, from the Kimjongilia flower (a begonia) to universities, awards, medals, and more. Plus, everyone in the country is basically required to wear a pin with the faces of Kim Il-Sung and Kim Jong-Il.

Trump names as many of his properties after himself as he can, claiming that he can charge more than regular market value for properties with the Trump name, such is the power of his brand. And yes, like Kim Jong-Il, there is a “university” named after him. It’s really just an expensive seminar one can take to learn real estate secrets from Trump.

2. Hyperbolic claims: Both are serial exaggerators.

Trump has repeatedly inflated his net worth by hundreds of millions to billions of dollars, as documented here by Gawker.

He has also exaggerated his popularity.

Claims to have invented the expression “Make America Great Again!” but it was actually Ronald Reagan’s slogan.

He has also called himself a top golfer: “Well, I’ve shot numerous times in the 60s, but I have the club record for an amateur at my course in Palm Beach, which is a world-class course, with a rating of 155. ” He’s also claimed to be a scratch golfer.

He has suggested that he is super-popular in Scotland (where his mother was born and where he owns golf courses). For example, he has repeatedly said he has a 93% approval rating in Aberdeen. But no such poll has turned up.

He guarantees that he can steal any man’s girlfriend. Watch out!

He has made outrageous claims about being a job creator. “I will be the greatest jobs president that God ever created, I tell you that.”

He has identified himsef as a fashion icon via his Trump Signature Collection!

He implied that his first wife Ivana, a champion skier, was an Olympic athlete who competed at the Montreal (1976) Olympics. Those were summer Olympics, though, and, while Ivana was there, she did not compete.

He even claims to be Batman!

He said he was “top of his class” at Wharton Business School at the University of Pennsylvania. The achievement is all the more impressive considering that none of his classmates remember him.

But that’s nothing compared to the PR Kim Jong-Il enjoyed.

It is said of the Dear Leader that he was born on the slopes of sacred Mt. Paektu, where a bird spoke with a human voice to celebrate his birth, and a double rainbow appeared. A new star appeared in the night sky, and winter turned to spring immediately (he was born on February 16th). If only he’d been born 2 weeks earlier, he might have been mistaken for a Punxatawney Phil.

Like Donald Trump, Kim claimed to be an amazing golfer. The first time he picked up a golf club, in 1994, Kim shot a 38-under par, including 11 holes-in-one.

It is said he can alter the weather just by thinking about it.

It is spoke that he learned to walk at just 3 weeks old, and was talking by 8 weeks.

He wrote no fewer than six operas, “all of which are better than any in the history of music,” according to his official biography.

Wait, stop: He invented the hamburger.

It is said that he knew more history at school than his teachers. Perhaps he was like Winston Churchill, who said “History will be kind to me for I intend to write it.” I think it’s a safe bet that Kim Jong-Il was a far superior inventor of history than Churchill, for whom it has never been said that his birth was acclaimed by birds speaking with a human voice. For that matter, Kim was also superior to Churchill in the category of teeth-having.

He penned no fewer than 1,500 books during his time at Kim Sung Il University. That’s more than a book a day for a 4 year degree. Perhaps it’s a mistranslation and by “book” he meant “joint” and by “wrote” he meant “rolled.”

He is an authority on all aspects of the film industry. His favorite movies are reportedly (get ready) Friday the 13th, Rambo, and anything starring Elizabeth Taylor.

He is a fashion icon revered the world over. Here his is vogueing on the catwalk in a suit of his own design.

1. They are so important that people write fan fiction about them:

Trump, to start off.

Fire and Brimstone: The Donald Trump Saga, Part I

Kim Jong-Il: while I have no English-language Kim fan fiction, such writing is extremely popular in North Korea, where people write about miraculous, fictional personal encounters they have had with the Dear Leader, in which Kim has shown tremendous condescension to them, or solved their problems like magic. These comprise a large percentage of all books published in North Korea.

Now, you should be experts in both men. So can you figure out which of the two men said which of the following phrases:

“Over the years I’ve participated in many battles and have really almost come out very, very victorious every single time. I’ve beaten many people, and I’ve won many wars.”

And what about this:

“I am the object of criticism around the world. But I think that since I am being discussed, then I am on the right track.”

(Quote one was Trump, quote two was Kim Jong-Il. )

0
"Crying in an Airport" by Victoria Larriva
"Yesterday" by W.S. Merwin