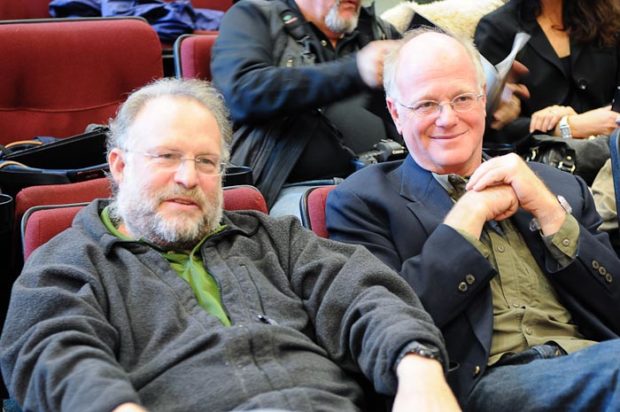 Ben Cohen and Jerry Greenfield, founders of Ben & Jerry’s Ice Cream, were arrested on Monday at the Capitol in Washington, D.C., as part of a protest to support voting rights and oppose big money in politics (read more here). Incidentally, they’ve also created a Bernie Sanders-flavored ice cream: Bernie’s Yearning. It’s mint chocolate chip, except that it’s 99% mint, while all of the chocolate chips, instead of being mixed throughout the ice cream, are at the top 1% of the container in a clump. I am not making this up. But now, I bet we’ll get some new ice cream flavors out of this experience. What will they be? Here are my top five suggestions.

5. Mandarin Orange is the New Black Forest Cake: A yummy mixture of dark chocolate and black forest cake with a tangy mandarin orange flavor mixed throughout.

3. Jailhouse Rocky Road: Like rocky road, contains chocolate ice cream, almonds, and marshmallows. But what makes this specifically jailhouse is that it also contains pretzel shivs.

1. Escape from Alcatraz Salty Carmel: a combination of salty caramel with chocolate shark bits lurking throughout, topped with a frothy vanilla whitecap.

Extra: Voting rights flavor. As is appropriate, consumers will vote to pick their favorite flavor.

0
"Blustery" by Neil Shepard
Making a Modern Opera: Behind the Scenes of the Adaptation of The Scarlet Letter by Composer Lori Laitman and Librettist Dave Mason