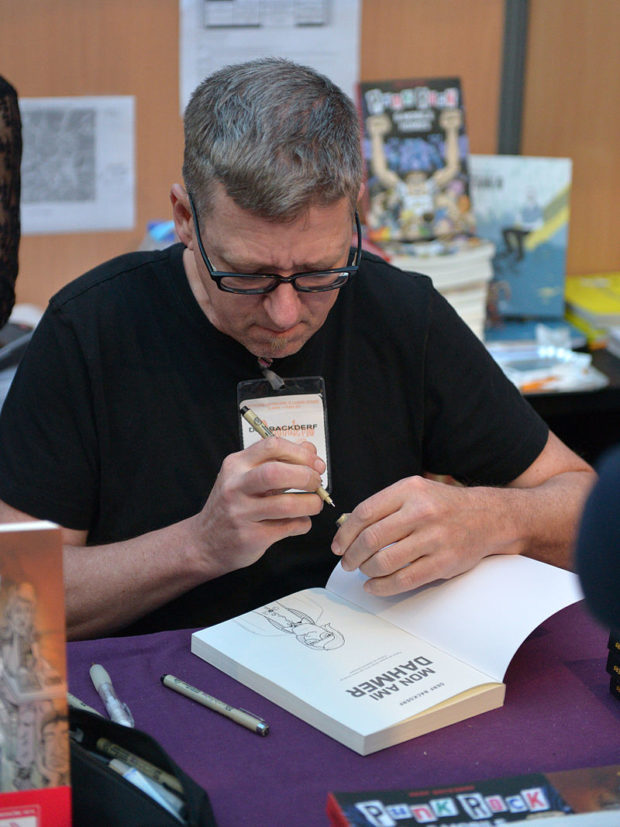 Graphic novelist Derf Backderf was a friend of Jeffrey Dahmer’s in high school. He wrote a graphic novel called My Friend Dahmer about the boy he knew in junior high and high school, growing up outside Akron, Ohio in the 1970s. Dahmer wasn’t a serial killer in high school—he was an outcast, odd, troubled kid. Here are the top five anecdotes from the book.

5. Beginning in 10th grade, a group of guys formed the Jeffrey Dahmer Fan Club. They liked him for his supreme weirdness—he was most known for throwing fake epileptic fits and pretending to have cerebral palsy. He hung out with these guys all the time, and they pulled all kinds of pranks with him. They even paid him $50 to go to the mall and do his epileptic fit/cerebral palsy schtick. He probably got this behavior from imitating his mom, who had frequent fits, possibly due to the up to 20 psychotropic drugs she was being prescribed, and his mom’s interior decorator friend, who had cerebral palsy. Other pranks they pulled were to get him into as many yearbook club pictures as possible. And they used him as an image for their joke candidate for class president. He got more votes than all other candidates, combined.

4. In the junior year of high school, Dahmer joined the class on a school trip to Washington, D.C. While there, Dahmer, who had a great talent for BS, somehow convinced the Vice President’s office to arrange a meeting between Vice President Mondale and Dahmer and a few of his classmates.

3. Beginning in their junior year of high school, Dahmer became an obvious and serious alcoholic. All the kids knew about it, but the adults, including his parents and teachers, never did anything about it or seemed to notice it. Dahmer would spend the school days in an alcoholic, stumbling, slurring haze.This freaked his peers out. At the time, he was struggling against his demons—he had an obsession with dead things, with necrophilia fantasies. He also realized he was gay, and was fighting to suppress that. He appears to have had a conscience and resisted the impulse to kill things, though he was an enthusiastic collector of road kill.

2. Shortly before Dahmer graduated from high school, he was abandoned by everyone. His increasingly disturbing alcoholism and weird schtick creeped out the Fan Club members and they stopped hanging out with him. At home, his parents had split up, and his father moved out. The divorce was very acrimonious and his mother got a restraining order against his father. She decided to take his younger brother and move halfway across the country to be with her family. But she forbade Jeff from telling his father, lest she get in trouble for leaving the state. So Dahmer now fended for himself in his home, but nobody knew about it.

1. Dahmer’s first kill occurred two weeks after high school graduation. He picked up a hitchhiker. When he was disposing of the body, he was stopped by the police, who found several very smelly garbage bags in the back of his car. He successfully convinced them that he was just on his way to the dump, disposing of some garbage at 3am, totally normal. If they’d searched those bags . . . but Dahmer had a series of amazing incidents in which he was able to talk himself out of trouble. Best known is the time when he was caught with a drugged, soon-to-be-killed victim, and he was able to convince the police that it was all cool.

Extra: when the author got a phone call telling him that one of his classmates was just caught by the police with a bunch of bodies and he was a necrophiliac, cannibalistic serial killer, Dahmer wasn’t the first classmate he guessed had done it. He was just the second one who came to mind!