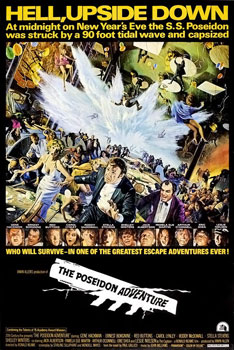 I love a good eerie underwater scene. The weightlessness and flowing hair adds a gracefulness to the scenery, while the inability to breathe adds tension. And looking at sets that should be on land but that are underwater can’t help but add an otherworldly effect. Here are five movies that took advantage of these aspects of filming underwater.

5. The Piano (1993): Holly Hunter decides she doesn’t want to live missing a finger and without her piano. She entangles her foot into a rope and goes underwater with her piano, where they sink, adrift. Later, we see a scene of her piano in its ocean grave, with her corpse floating above it.

3. A.I. Artificial Intelligence (2001): 2000 years of artificial intelligence trapped, alone, in the flooded New York City—a city still recognizable due to the World Trade Center towers, which in this universe are left standing. It’s a great way to show the inhumanity of the android, the better to highlight his humanity.

1. Lethal Weapon 2 (1989): Mel Gibson’s character, Martin Riggs, is strapped into a straight jacket and thrown into the bay to drown. He only just manages to wrestle free when he notices his girlfriend, staring at him with dead eyes underwater next to him.

OK, this is the whole reason I wrote this list.

Night of the Hunter (1955): The creepiest of the underwater scenes—Shelley Winters floats, dead, underwater, sitting in her car.

All the more impressive given the greater technical limitations they’d have been facing when this movie was filmed in 1955.

For someone who portrayed three drowning victims in her career, Winters must have been a skilled swimmer, because in The Poseidon Adventure (1972), she did her own lengthy, complicated underwater stunts, as seen here: