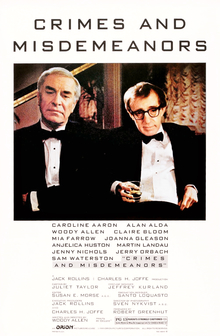 Old Woody Allen movies sometimes reveal a treasure trove of unpleasant observations about the way Woody Allen thinks, particularly given what we’ve subsequently learned about his private life in the interim. I recently rewatched the 1989 film Crimes and Misdemeanors, which is widely regarded to be one of his best films. The film’s A plot is about how Judah Rosenthal (played by Martin Landau), a highly respected and wealthy Manhattan ophthalmologist, who has a very wholesome life with a wife who adores him and several successful children. He has grown tired of his younger mistress (Anjelica Houston) and wants to break it off with her, and she proceeds to blackmail him to prevent this. He then has her killed by his mobbed-up brother, after which he is consumed with guilt and much contemplation about whether the universe is an indifferent void or if there is a just god who punishes the wicked. The B plot is that of Woody Allen, an unhappily married, unsuccessful filmmaker who is making a documentary series episode about a pretentious, boorish TV comedy producer (played by Alan Alda and based on Larry Gilbert) while trying to have an extramarital affair with the series’ producer, played by Mia Farrow. Allen is also working on a documentary about a Primo Levi-like scholar who speaks eloquently about how love is the only thing that gives life meaning.

5. At one point Allen’s character, Cliff Stern, complains that “The last time I was inside a woman was when I visited the Statue of Liberty.” The camera then immediately cuts to Dylan Farrow, aged about 4, who was playing an extra in the film.

4. Allen’s character complains to his wife that she hasn’t slept with him for one year (and then shortly thereafter tries to initiate an extra-marital affair). Later, it would be publicly revealed that Woody Allen was having an affair with long-time girlfriend Mia Farrow’s daughter, Soon-Yi Previn, and Allen at that time excused himself by saying that Mia hadn’t slept with him since the birth of their son, Ronan Farrow, which happened about a year before this movie was filmed.

3. Allen’s character spends a lot of time going to movies with his niece in the film, aged about 12, who dresses just like Annie Hall in men’s clothes and ties and hats. It’s all innocent, except that in retrospect it seems creepy.

1. The sister of Woody Allen’s character goes on a date and her date convinces her to let him tie her to the bed when they have sex. He then poops on her and leaves. Distraught and traumatized, she goes to her brother to tell him about it and get comfort and sympathy. He calls her an idiot and stupid for letting that happen to her.

0
"The Woman Turns Herself into a Fish" by Eavan Boland