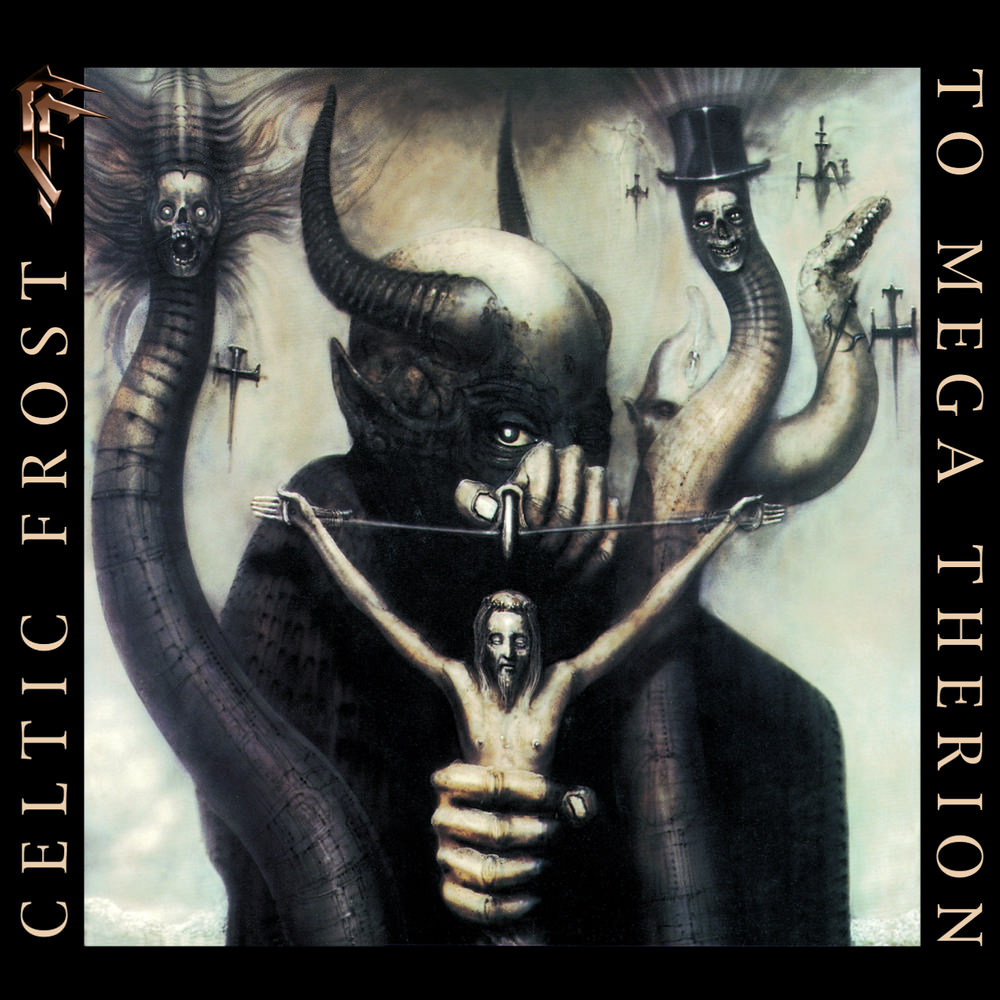 Venom’s previous three albums featured iconic images created by Conrad Lant, better known as the titan Cronos, lead singer and bassist of the power trio. While Lant’s goat heads and inverted pentagrams have come to be closely associated with the band and with the origins of extreme metal iconography in all its dark variety, the cover for the 1985 album Possessed remains the most gripping of their efforts. By the mid-1980s, the band was coming apart, and the album, a flailing, barely-produced packet of shrill noise, is emblematic of the desperation and confusion experienced by the band and their legions of cultist fans who realized that the band was on the verge of dissolving after the disastrous Seven Dates of Hell tour, which nearly claimed the life of at least one band member. The album was despised by heavy metal critics (it received one K out of five from legendary Kerrang! music magazine), and some writers wondered if the band wasn’t committing a purposeful act of self-destruction by creating and releasing an album as noxious and unlikeable as Possessed (the next intended album, Deadline, remained uncompleted at the time of the guitarist’s departure later that year, and the tracks have still not been made public).  The title track, “Possessed,” was actually ranked fourteenth on the Parent Music Resource Center’s infamous “Filthy Fifteen” list of the fifteen songs the committee found to be most objectionable. Although the cover of Possessed was surely created as an afterthought and under the baleful influence of tidal waves of drink and Matterhorns of drugs, the cover is beautiful and unsettling in its simplicity, a testament to all that is best in heavy metal: two children, one with head coquettishly tilted, wearing Venom t-shirts, are displayed as a photo negative. Are they themselves victims of satanic possession? Should we pity them or fear them? “Suffer the little children to come unto me” indeed! Will they lure gullible victims with their seeming innocence? The image is as washed out and etiolated as the songs, which sometimes seem mere static over subterranean rumblings. The boy on the cover is the son of the band’s drummer, Abaddon, and the girl is the niece of producer Keith Nichol. Rarely has an album cover so perfectly mirrored its sonic contents while capturing the suicidal immolation of a once-great band. This legendary album kicked off a new era of high-energy, playful, and slightly more literate heavy metal with the title track “Among the Living,” a song based on the 1978 epic Stephen King novel The Stand, an apocalyptic account of a final showdown between good and evil. Anthrax was a deeply moral band in many respects, brooking no connections with the satanic undertow of 1980s heavy metal, and they were often very literal in their interpretations of the stories they adopted (another song on the album is inspired by Stephen King’s terrifying Nazi-in-hiding novella “Apt Pupil”). Despite the naive expropriation of literary works of all stripes—though they tended toward pop, and the album also has a song based on the Judge Dredd comic book series—the cover art provided by Don Brautigam proved both intriguing and disturbing to tyro fans. The image features a figure who seems simultaneously holy and satanic. Is he a preacher? Is he the Antichrist? He gives off an eerie glow and raises his hand, as if to testify, among a crowd of indistinguishable bowed heads. Who wouldn’t be curious about the contents of this album, which range from social critique of society’s hypocrisies to mindless adolescent revelry? The cover’s vaguely threatening individualist recalls John Milton’s sympathetic treatment of Satan as a rebellious hero in Paradise Lost, and it reminds us that sometimes evil and disorder are merely one way of seeing the anarchy of true self-determination. This icy, provocative cover conjures images of high German romanticism, and it is ideal for the Sturm und Drang content within: songs devoted to H.P. Lovecraft mythos, to being “trapped under ice,” being led to the electric chair, fighting in endless, futile wars, and, of course, entertaining long and profound considerations of suicide. It is a brutal, dangerous album that stood the test of time and should remind  listeners of the importance of Metallica, even as the band’s members continue to struggle for relevance as middle-aged rock stars. It was an exciting and terrible time to be alive, and young listeners gathered to lower the needle and lose themselves in the frantic, classically-inflected majesty of Metallica. From disarmingly mellifluous baroque harpsichord preludes to the brutal pounding of muffled electric guitars and double-bass-drums, it is an album that still has not been outdone, perhaps not even by the band themselves, and its Wagnerian cover is every inch worthy of the music. Thomas Gabriel Warrior, the presiding creative force and only permanent member of Celtic Frost, got it right with this album, by far the band’s best effort. By the mid-1980s, Celtic Frost had grown more ambitious and increasingly Gothic in its outlook. After their debut, the stripped-down, Motorhead-inspired Morbid Tales, they could only grow. To Mega Therion introduced epic tales, elevated poetic language (sometimes lifted shamelessly from Charles Baudelaire and Conan author Robert E. Howard, among others), tympani, sopranos, and all manner of studio effects in order to erect an aural Tower of Babel that outstripped the vaulting ambition of its creators. For the cover, Warrior selected a masterful and truly unnerving painting by Swiss neo-surrealist H.R. Giger. “Satan I” mischievously portrays the Dark Lord aiming a host wafer at the viewer with the help of the crucified Christ blasphemously deployed as slingshot. Lucifer’s three tails are topped with twisted heads, a half-jawed lizard, a top-hat wearing skull, and a shrieking harpy (the band was at the time a trio). Rarely have heavy metal album covers achieved such rich irony and technical prowess (though thousands have tried). The album is dedicated to the astronauts of the Gemini and Mercury missions (also to the memory of Gus Grissom and Apollo 1), and a second, massive Giger panel is revealed when the vinyl album gatefold is opened, titled “Victory III.” It is only slightly less troubling than the Giger cover art and the “necromantical screams” of Warrior. Reign in Blood must be understood as one of the most violent and influential heavy metal albums of all time. After the band signed to Def American records, legendary producer Rick Rubin helped the band to perfect a bullying, relentless barrage of sound. The entire 12-song album runs scarcely half an hour (32 minutes and 44 seconds, short enough to fit on one side of a 1/4″ cassette tape). The songs on the album are at times almost indistinguishable, but taken in toto they represent a unified vision that has yet to be matched. The album’s dark materials—the Holocaust, violent political upheaval, paranoia, insanity, sadism, murder, and, of course, satanism—burn listeners with the Slayer brand from the very start. The arresting cover art was provided by Larry Carroll, who at the time was creating political illustrations for The Progressive, Village Voice, and The New York Times. It recalls the apocalyptic religious visions of Hieronymus Bosch (Garden of Earthly Delights) and Pieter Bruegel the Elder (Triumph of Death) as well as early church art. By turning to classical themes and techniques, mixed with modernist collage methods and the influence of artists such as Francis Bacon, Carroll was able to contribute one of the most unnerving and durable album covers of all time. At the time, the band could not reach a consensus on Carroll’s art, but when one member showed it to his mother and was told it was “disgusting,” they decided they were on to something. They were.

Compiled and written by Ernest Hilbert

"Ladies, I’m screaming out to you from the depths of this phallocentric tyranny": "Id Engager" by Of Montreal