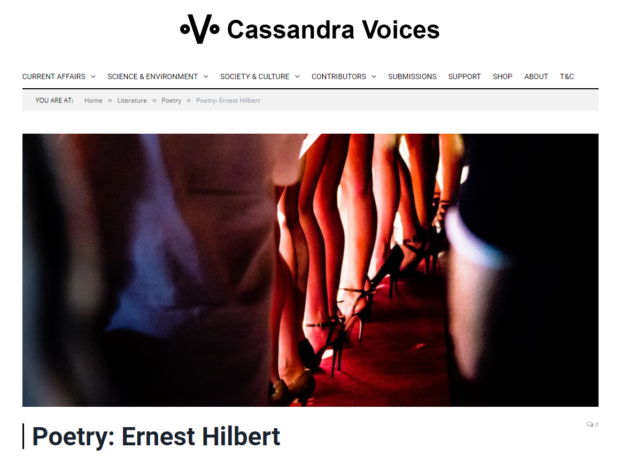 Three new poems by Ernest Hilbert appear in Cassandra Voices: “Spolia Opima,” “Crypt,” and “Apollinaris, Medicus Titi Imperatoris hic Cacavit Bene.” The first of the three is in a book-in-manuscript titled Storm Swimmer. The other two will appear in a book, also currently in manuscript, titled High Ashes. Cassandra Voices tends to run bolder, more provocative poems. Hilbert’s poem “Visitations” appeared in its pages in 2018. The Latin term “spolia opima” translates as “rich spoils” and refers to the trophies a Roman general stripped from the corpse of an enemy slain in single combat. Click here to read all three poems at Cassandra Voices.

Models, slender and famished as cheetahs,
Shed their imperial haute couture—
Already in sweatpants, they hail their cabs

Behind the Grand Palais before
Applause dies down inside around
The vacant runway. Afternoon sunlight’s

Lambent overhead on friezes of Lutetian Limestone.
Violinists grimace at their scores—
Haydn, Hollywood, the B’s and Broadway hits,

They’re paid to make the beauty go.
Why else? We all make beauty pay.
Gourmands’ are all aglow as it arrives—

Voila, another flambé. Cherries, drenched
In century-old brandy, burn like coals.
The waiter itches to check his phone. He grins.

I’m given to hyperbole, I know,
But something’s got to me. It’s all around.
You have to learn to make it pay you back.

The bathroom’s OUT OF ORDER. Sewage seeps
Into the restaurant. The manager’s
Frantic, alone today. The line’s

Become a mob. A voice from an SUV
Barks at the drive-through speaker. In the back,
Children cheer a whirl of color on a screen.

I feel the boredom underneath the beauty.
It’s weird, and getting desperate these days.
In auction rooms, the arms go up. And . . . sold.

The next exquisite investment’s on the block.
The views—the hills, the seas—are still pristine for those
Who can afford the heights. Who’s this beauty for?

Beauty’s boring. I do go on and on,
Don’t I? Oh, you have a nosebleed.
Here, drip some in my drink. See this?

Flick this switch. Now listen. Someone will scream.

Click here to read all three poems at Cassandra Voices.

0
"The Cricket" by Joshua Eric Williams