“The Costume Party” by Juliana Gray 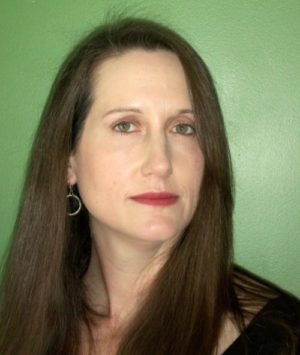 A Mad Hatter. A Star-Bellied Sneetch.
A couple of flappers—Zelda? Virginia Woolf?
My honors students, who’ve pillaged the thrift store racks
for literary costumes, shuck their coats
and tell me to guess who they’re supposed to be.
Hester Prynne is easy. Quentin Compson’s
suit is torn, and an iron hangs from his belt.

Then Kate, a girl I don’t know well, clicks
into the room in black Mary Janes,
a pencil skirt, sweater—is this a costume?
Has she just come from work? I don’t know what
to say except “I like your stockings.” She smirks.
I look again—isn’t her blonde hair
a little darker? With newly sideswept bangs?
The stockings’ teal pattern climbing her thigh?

Finally, I laugh. Of course, she’s me,
or who she thinks I am—Dr. Gray,
with her long hair and sensibly sexy clothes;
Dr. Gray, who’s fighting adulthood and age
by showing off her legs and partying
with undergrads; Dr. Gray, who
can take a joke. Kate and I laugh.
Tonight, she’s me. And who am I supposed
to be? Somebody else, somebody else.

Juliana Gray is the author of The Man Under My Skin (River City Publishing, 2005) and Roleplay (Dream Horse Press, 2012), which won the 2010 Orphic Prize, Honeymoon Palsy (Measure Press, 2017), as well as the chapbook Anne Boleyn’s Sleeve (Winged City Press, 2014). Her poems have appeared in Best American Poetry, Birmingham Poetry Review, Sou’wester, 32 Poems, and other journals and anthologies. An Alabama native, she lives in Alfred, New York, where she is a professor of English at Alfred University.

0
"Four Weeks" by Dora Malech
"The Metamorphoses of a Vampire" by Charles Baudelaire (Trans. by Donald Justice)