“The Blind” by Luke Bauerlein 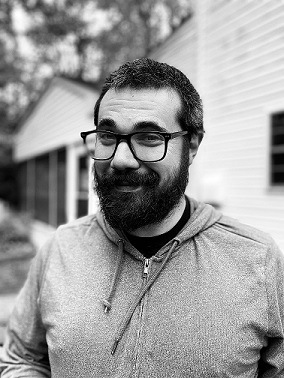 In the end the Rabbi loses his sight. The reasons for his blindness go unexplained, but this fails to bother you because it’s clear now, by the way he dances with his daughter in the final scene of the film, he has no sight whatsoever. They are at her wedding, and he has already given her away. See how less assuredly he shuffles his feet along the polished wood— though he’s moving remarkably well, you think, for a Rabbi— the way his steps suffer those brief hesitations, and look, that slight tug she gives his jacket just before every turn, yes, look, she’s leading him.

You feel the blindness must suggest something. It feels filled with a certain portent, that’s the word, a portent concerning ignorance or grace, or perhaps finding grace in the face of ignorance. You’re not quite sure. But you never liked being sure anyway. What you like is that the blindness seems meaningful. Even the pretense of meaning is enough. Because the man you’re watching isn’t blind. You know he’s not even a Rabbi. He’s just a man. Playing a Rabbi. Acting like a Jew. Playing blind. But that no longer matters, exactly. Whether the character is blind, or the man is playing blind, or the Rabbi never existed at all is irrelevant. It only matters that you watch him dance. That you recognize his condition as blindness. You see his daughter dressed in white, the flowers in her hair so yellow you could just about smell them, and think, this is her wedding. And so the film ends.

But that doesn’t seem right either. And getting it right seems important this time. It’s been bothering you now for a week. You call a friend. You’ve got it all wrong she says. The blindness doesn’t mean a thing. But you protest. You say, the blindness is artifice, but it’s the product of choice. It’s a movie. Everything is artifice and choice. The lighting, the lipstick, the language— none of that was random. The blindness isn’t random. The director, the writers, they made him go blind. There’s got to be a reason. Why else would they do it? No, she says. It was the story. You’re trying too hard. The Rabbi had to go blind. There was no other way. Get over yourself. If they could have done it differently, they would have. Don’t you see? They had nothing to do with it. There was no other way.

Luke Bauerlein’s poems and essays have previously appeared in the NY Times, Rattle, BODY, Unsplendid, and elsewhere. He currently resides in SE PA and has been known to emerge from basements, blinking.

0
"Fire in the Angels" by Anne Higgins