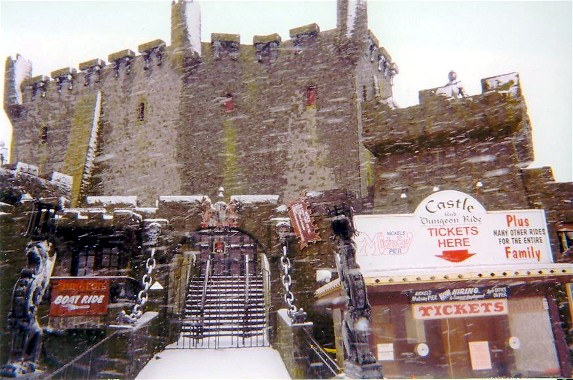 My light-hearted summer “horror” poem “Summer Scream” appears in the new issue of Per Contra, an international journal of the arts, literature, and ideas.

Dracula, done with his shift,
Sips a Schlitz under the boardwalk.
Unicorn Man and Satan
Draw straws for the last beer.
The Bride of Frankenstein deals
Quaaludes. An organ drones low.

In Orange Crush t-shirts and flip-flops,
Teens slowly toe along dark corridors.
They raise Zippo flames like tallow torches.
Muffled screams drop from the tower.
Rooms are redolent of armpit and Peach Schnapps.

The Mummy smokes in the break room
Under a torn Cheap Trick poster.
Wolf Man feels sweat streak down his back.
Headless Woman nonchalantly dusts
His hand from her bare knee.

Zombies moan for brains but try
For strokes of tanned teen breasts.
Portraits in the Hall of Ancestors
Jump to life. Ghosts sulk in the walls,
And the witches burn every night.

When the castle closed down for the last time,
It stood open to seaside winds
And rocked on its pier in the night.
Kids made off with pillaged memorabilia—
Suits of armor, candelabras.

One summer, a cigarette rolled from its tray,
Touched a papery gravestone.
Before an hour was out, the castle
Snarled with flame and smoke.

The mad scientist’s lab sagged into sand.
The blackened walls stood on their stilts
Another year, until a winter hurricane
Tore down the remains. At low tide, in moonlight,
The tips of charred pylons show like fangs.

0
Images of The Book Collector, a New Opera by Composer Stella Sung and Librettist Ernest Hilbert
"The Night my Sister Went to Hollywood" by Hilda Sheehan