“Romulus and Remus” by David Lehman 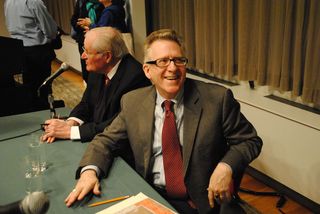 Look for Remus in the index of a book
And you are bound to get “See Romulus”
Which is perfectly logical but makes me wonder
About indexes, or indices, and why I prefer the former
As the plural except in a financial context, and how
An index to a book that may not exist may imply
A whole biography, as my friend Paul Violi
Showed in his poem “Index.” My late friend
Paul Violi, whom I still see in the street
Sometimes, walking along at an unhurried pace
So if I walk fast I will catch up to him at the corner
Before the light turns green.

David Lehman’s books include One Hundred Autobiographies: A Memoir (Cornell University Press, 2019) and Playlist: A Poem (University of Pittsburgh Press, 2019). He is the editor of The Oxford Book of American Poetry and series editor of The Best American Poetry. He has written nonfiction books about the New York School of poets, classic American popular songs, Frank Sinatra, mystery novels, and the scandal centering on Paul de Man, the Yale guru of deconstruction who wrote for Nazi-controlled newspapers in his native Belgium.