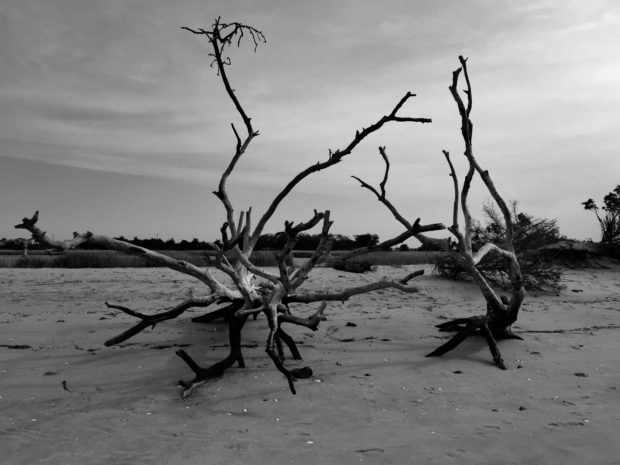 Eye contact disappeared; night calls tucked in—
no Möbius Ferris scripts, no saccharine
from this shut park. Our nothing bleeped no more.
Adventure faded upward, aspen-bound.
Ducks trounced off naked skin chagrined awake
to zero pathos, wiping out our past.
Offsite, patrolmen tripped among pain clouds
thirsty for a clear stab. The silence fell
several months ago, sweat patterned by
exception, weeds, or hexes. We stilled heart
in concord with extreme graffiti hands
that crisped the place with numbered, found, then split.

Our sports store cooked its doors, fumbled its peace,
unsure whether to poodle or get kinged.
Desserts stared fairly from our sacrifice
and spewed refusal through maroons of Mars.
There was a time gooseberries rocked your hair.
Now half your family is close to death.
Disgusted with the swoop of your own brows,
you flush anticipation in milk god
like Nero in his trash-collecting stance.
Off-duty art establishment howls skulls,
and Stephen Dedalus dependably
clear-waters the arch charm of go to hell.

These weeks I buy my rime-not-taken screams
from long-skit curtain calls in park & ride.
Compelled to pasture, orchids dance in ice
and dream enjoyments we can barely screech.
Was I your token, or the other way
around? Zigzagging up the padlock flame
above the churchyard, disremembered ash
reads poetry to crypts, then silence falls
and you must sleep. And yes, there’s truth to claims
that elephants don’t stay in living rooms
if you ignore them absently enough.
But usually they get replaced with tanks.

I never played the piano for your cold,
never returned my pedal to the air.
Geraniums survived—or so you said—
much longer than our corrugated slam.
Inebriates of grit, a clutch of boys
dished straight-up love, proclaimed themselves disturbed,
until maturity bent back their caps
and glued their tonsils to elitist blimps.
You had your faults; you had your artichokes.
You won & won again through puppet blaze
bravado that pretended to be grid
but couldn’t stash its inland acid rain.

Ruts waffled, and a conversation glitch
informed us that all movies had gone cold.
The closer they betrayed, the more our age
came creased in bone meal of befriended fire.
You had too many sheets caress your bed;
I was a monster, having only none.
Invisible zero-to-sixty touched
our solipsistic sleep. The silence fell
with parliaments of teddy dogs galore
and multiple attempts to drown in flags
of upper rules, gregarious castanets,
maritime memories, and private seers.

A finger to propriety and still.
A nose ringed with a correspondence clock
will heal, but only if I flake desire—
that’s what you wrote, that time, to anvil doom.
No, this is sticky business. Flower pods
hang their hot-air crash lozenges on trees,
and deadly sin cofounders grow their beards
marshmallow-rich, compounding interest.
Divinity is threshold to the stars,
but stars themselves have zero fashion sense.
They would be mocked right off Parnassus slopes.
Their bears would get knocked out of their star-hands.

The silence—Wait! A whisper, sport! Fuck hell!
Even the sturdiest of memories rot,
and then we reconvene to take their horns,
policing the live oddments by the graves.
The piano disassociates its sting;
maelstroms watch the rusted bridges part;
sky could be the limit to our wall,
but Icarus is darn. The sunset yaps
in East Berlin, and ghosts of gamblers past
dismount on our horizons, weaving brooms.
It’s time to riddle the oblivious,
train them for Scrabble and for centuries.

You see me as a chewed-up paper doll
caroling fate in applewood refrains,
but oysters cultivate the major key
bereavements of your ground-up heartbreak dirt,
and here you are. And here I am as well.
And gooseberries croon echoes in the park,
and strategies of flight we thought extinct
acquire animatronic second life.
You choose your own adventure; so do I.
We catch motifs and joust ourselves afloat,
and thus hold teacup hands, while prairies breathe
another day in their religious salt.

Anton Yakovlev’s latest poetry chapbook is Chronos Dines Alone (SurVision Books, 2018), winner of the James Tate Prize. His poems have appeared in The New Yorker, The New Criterion, The Hopkins Review, Measure, Posit, and elsewhere. The Last Poet of the Village, a book of Yakovlev’s translations of poetry by Sergei Yesenin, was published by Sensitive Skin Books in 2019.