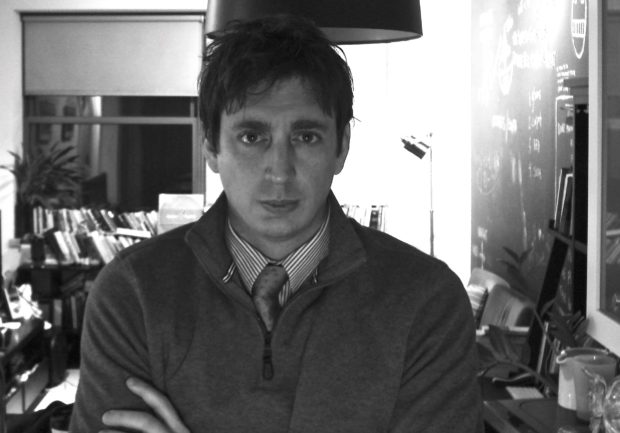 Like countless others in our virtual age, I’ve called
on the algorithmic genius of unknown programmers
to crack the cryptograph of my needs [my wants?] and find me
what, exactly? Love. Sex. “To know both, keeping the difference
visible, is the subterfuge called eros.” Or not. Though
subterfuge is forgiven, perhaps, in the cheerful face
of the form’s demands: “What are you doing with your life?”

it grins. Compression is key. But who hasn’t hemmed, hawed,
begrudged a quiet not enough as half-formed in camera
rumbling turns to rummage? My “match” will [they promise] find me,
and they provide a flowchart “to my heart” as evidence.
I’m no bargain. To comprehend, follow the arrows
that never arrive → cf. Zeno ← at the heart’s carapace.
Heart’s cockles? No matter. Either way: just divide in half.

“Over a million profiles to choose from!” but what chafes
if we ignore that preposition stood up by syntax—
is the false agency. Choose? One self-regarding monad
among many, we’re knee-deep in the primordial muck
because we are the primordial muck. Hunger. Repletion.
How best to cope with the lawlessness of such large numbers?
I adopt an Eighties workshop ethos: show, don’t tell

hard-learned if learned at all – thresh gilded wheat from brazen chaff.
Farewell, Kute_n_Klever. But puns play and so does Jumpin_Jax,
who loves Murakami, “exotic locales,” Matt Damon,
hates “Monday,” passive-aggression. You could glide a Buick
between under construction and under completion
and still never tell them apart. There’s strength in penumbras.
I cough up “everything,” nothing, invoke the soft, slow sell.

Still, someone floats a trial balloon—we’re 87%
matched, she notes, only 2% “enemy.” History
suggests it’s my enemies that I keep close enough
to kiss. [Cf. Seidel, My Tokyo, pg. 27.]
Messages arrive—saw-toothed, the way a market behaves.
But I lose interest, and then credit. Ever the lecher,
I steal a peek at the swimsuit pics, a beggar-thief.

Who isn’t? Some advice. Ignore the bioluminescent
warmth of collective need, the sense nothing is arbitrary.
Approach 0. Accept that sometimes nothing is enough.
Reject the transfinite strata of anyone else’s heaven
with gentleness. Let your wit multiply like waves.
Divide Zeno from archer from arrow from fletcher.
Court paradox. Don’t change. You should message me if.

Spencer Short is the author of Tremolo, a winner of the National Poetry Series Open Competition, published by Harper Perennial in 2001. A graduate of the Writers’ Workshop at Iowa and the Law School at the University of Chicago, he lives and works in Philadelphia, Pennsylvania.