“New Order of the Ages” by Rick Mullin 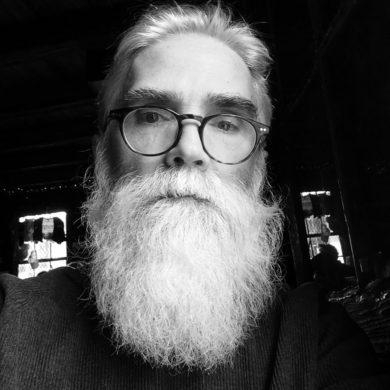 Could any but the brutal eye attest
to destiny in the Masonic line
that angles on Four Corners® in the West?
What intellect rejoiced in this design?
What architect aligned the airy space
beneath the cosmic oculus that lights
the Sphinx Experiment? Who set the base
against the flood? Which element ignites
this pyramid of endless civil war?
The day shall pit majorities against
a skewed perception massed at superstore
or bussed to stadium, the future fenced
on channels that provision the enslaved.
What visionary rising can be saved?

And Philadelphia’s fraternal pranks
can only go so far in serenade
of glass harmonica on plywood planks
that Steamboat calls Democracy. He played
the cops against each other Wednesday night
as Walter wandered shirtless to the war
a-callin’, “Captain!” No one came to light
the bar at intermission.

But before
we knuckle in the mustard of our grief,
remember that we bought a mouse with zip!
for personality to pump belief
into the engines of our voided ship,
where in the hold, subversive, lurks the prick
whose sticklike fingers hold the founders’ brick.

III: Christ in the Suburbs

Creator, author of the fool’s canard
of crossing to creation, captured where
economies of scale engage—regard
the brutal neighbors, God, your sullen heirs!
Executors of your divinity
declared an endless war. But could they find
the stone we perched upon your tomb, or see
the logic of your wrathful, errant mind?
Erase this math where two and two come four.
Unwind our hearts so we might disengage
from their domain and disinherit war.
Exempt us from this Messianic age.
For, God, their vision and its spawn are one–
the neighbor’s kid, his Hummer, and the gun.

From Stignatz & the User of Vicenza
Dos Madres Press, 2016

Stignatz & The User of Vicenza by Rick Mullin