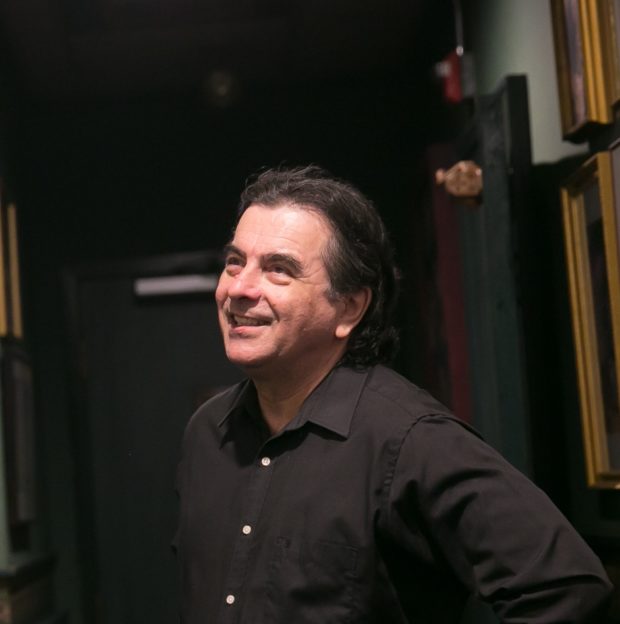 They wore earth tones, deep tans and saddle leather
taupes along with bat-gray, and the standby
blacks of stockings tightly sleek, kerchiefs
that cowled their broad-brushed, animated features:
Old World women and their men, coarse-vested,
arms in rolled up sleeves, home-cobbled boots
with soles the thickness of their thumbs, went out
together in a group on Saturdays
into the woods, brown grocery bags in hand
to hunt wild mushrooms, as they used to do
in Sicily. Old Country woods and New,
not quite alike, still yielded much the same,
and though I was a child and uninvited
I wondered how the wisdom carried over
that led them to the aspens, oaks, or birches
which sheltered, huddled at their bases, all
the rich array of fungi that they prized.

Did they amuse themselves, imagining
that they were young again, those friends, long-standing
bootstrap immigrants, on foot along
familiar childhood paths? Did they tell stories,
sing, exchange old gossip? I imagined
finding the favored objects of their search
conferred a comfort deep and reassuring:
Old Country truths still served them in the new.

For all that mushroom gathering was hidden
from me at nine, I’d see when they returned
their treasure: secret creatures swelled at midnight,
heavy with their oily essences
which stained the paper bags in dark, wet circles
everywhere they touched. When tumbled out
across the kitchen counter, plumped up dreams
or languid fancies, visible, could not
have stupefied like these, stubby and hunched,
buff-domed, or tendril-tall and gently turned
with undersides close-vaned and delicate,
still dressed in clinging flecks of moist black earth
and borrowed colors, here and there exploding
in flaring ochres or smooth bluish-black.

Into a pot of water they would go
then, with a shiny silver Walking Liberty
half dollar. Heated to a rolling boil,
they’d surface, bobbing in a group, their tones
slick and muted. Strained off, they would sit
while my Nana dumped the water out
and fished up the bright disc. Initiate
to mysteries, she knew: a blackened coin
meant poison, and the trove went in the bucket.

Today I read that test is false, a folk
tradition born in superstition, thought
true because experience led the hunters
to make safe choices. Current wisdom warns
that look-alikes in a new country may
deceive and threaten, deadly, though the coin
comes clean. Our halves today, bled of their silver,
no longer speak, and lack their audience.

Experience hints to us still of danger.
But in today’s world, look-alikes, more norm
than rare exceptions, rule, and springing up
in darkness overnight in thick profusion
crowd out our comfort with familiar truths.
Where is our testing coin, and the belief
that lets us trust a search in unknown regions,
in friendly and long-standing company?


Al Basile is a poet, singer/songwriter, and cornetist. He has fourteen solo CDs under his own name, which regularly reach the top 15 on the Living Blues airplay charts following their release. He has six Blues Music Award nominations as best horn player, and his 2016 release Mid-Century Modern was nominated as Best Contemporary Blues Album. His first poetry collection, A Lit House, was published in 2012. He was co-winner of the Meringoff Award for poetry in 2015, given by the Association of Literary Scholars, Critics, and Writers. He considers the texts of his poems to be like sheet music, and his recorded performances to be important examples of interpretation. Tonesmith, his second book, provides a link to his reading of all 100 poems in the collection.