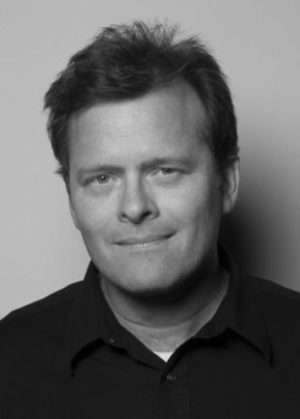 Music is one of the first things to go
in the general condition of being out of it—
you know that when you’re behind the broadcaster
on line at the liquor store
and her ringer is a happy snatch
of a song that sounds like cutoffs around a keg
in Happy Valley, PA, home of the Nittany Lions,
of forestry majors
in the night of brilliantine slugs
and other lamed Clapton hits.
This edge of town for instance
has been blunted on its yoga ball,
but somebody is still here to sell beer.
And later on, a couple can visit an oak bar
with our friends from the English department
with their weird sorts of consumerism
that they happen to think is smart.
All the chin-studs want to dance with each other
by the yellows and greens of the beer cases,
and other sexy eleven p.m. anchor women
float up in a space-junk flotilla,
bolts and astronaut foil
in the skies without horizons.
The weather watchers were on call
for a breeze through lakeside pines
and birches away from the shore.
Even though I know that the chin-studs
are actually brothers with the earlobe plugs
when they squabble over flavored cigarillos
in sibling rivalry, even though I believe
in their tension, humor and rage,
their squalidness grosses me out,
even as their outrage percolates
in the lid where the bottom
of the culture washes up
into the screwed in lid
of songs looped together,
the grand dead music
a way you never heard it before,
as a crab’s eye on its long stamen,
and jeweled mandibles and sounds
of metal real estate signs at night.

David Blair is the author of three books of poetry: Ascension Days, which was chosen by Thomas Lux for the Del Sol Poetry Prize; Arsonville; and Friends with Dogs. His poems have appeared in Boston Review, Ploughshares, Slate Magazine, and many other places as well, including the anthologies, The Best of Lady Churchill’s Rosebud Wristlet, Devouring the Green, and Zoland Poetry. He lives in Somerville, Massachusetts, with his wife and daughter, and he has a degree in philosophy from Fordham University and an M.F.A. in creative writing from the University of North Carolina at Greensboro.

0
"The Farmer's Bride" by Charlotte Mew

"Crying in an Airport" by Victoria Larriva