“Live from the Dakota” by Ned Balbo 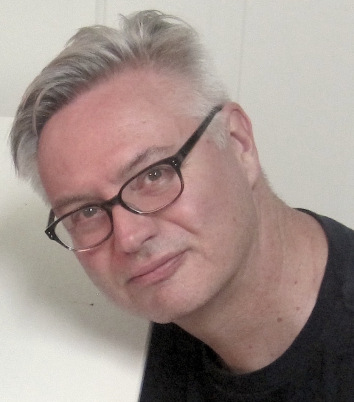 Through noise and smoke-haze drowning the TV
above the bar, your photograph flashed on
that Monday night close to semester’s end
as if you’d joined the dead, closed captions still
unheard of as I glanced up at the screen.
Some file shot—outmoded mop-top, grin—
What were you up to now? But then the years—
your birth and death—appeared. I stood there, stunned,
proved wrong, but brought the brimming pitcher back
to friends for whom you held no special place—
Could that be true? It was. Still, they were kind
enough to hear me out, surprised as well.
What did I feel? The whirl of punk and disco
winding down had dropped me at the brink
of some new age I’d welcome or resist
to no avail, while you, five years retired,
were someone that I’d learned to live without.
Back briefly, twice as old, you were gunned down
before I’d yet forgiven you for leaving.
And who was I, exactly?
Poured beer banked
off empty glasses, Donna Summer mourned
a cake left under storm-clouds, while the Stones,
savvy survivors, vowed that they’d refuse
the role of burdened beast beneath the beat . . .
Back in my room, my girlfriend flipped through Time.
A record spun. I watched, blurred spectrum swirling
as the stylus fell, calling your voice—
loss-haunted, lasting—back into the world.

Ned Balbo is the author of The Trials of Edgar Poe and Other Poems (awarded the Poets’ Prize and the Donald Justice Prize), Lives of the Sleepers (Ernest Sandeen Prize and ForeWord Book of the Year Gold Medal), Galileo’s Banquet (Towson University Prize co-winner), and Upcycling Paumanok. The recipient of a National Endowment for the Arts translation fellowship, three Maryland Arts Council grants, the Robert Frost Foundation Poetry Award, and the John Guyon Literary Nonfiction Prize, he has held fellowships or residencies at the Sewanee Writers’ Conference, the Vermont Studio Center, and the Virginia Center for the Creative Arts.

0
"The Lost Pilot" by James Tate