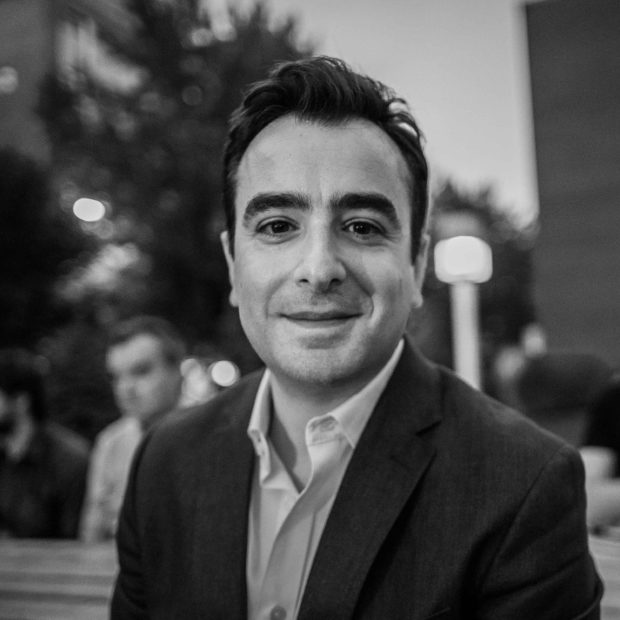 Owning nothing, there is, I see today, a touch of those cars
about my life, a touch of decay in that flotsam of chrome

and strewn on cinder blocks, all that automotive cartilage
and bone, the mounting lugs, drive shafts, and valves, that

high-rise of mess, that pile gagging on its own size, and then
to have the clutter just sit there, so big you feel really bad

for the ground bearing the brunt of it, scattered and busted,
dismantled, maxed-out—everything allowed its hundredth

and hoods sporting splatter patterns of corrosion as bright
as blood, then there’s the flacking of mud, and colour here

nothing more than the crash of tinctures. And the surfaces?
Oh, fish-scaled or brindled or grease-charred or scratched

like Arabic scribble, paint the tint of fruit sickened with rot,
dense exfoliate pinpricks of umber that crust lichen-thick,

or ochre haemorrhaging up through some scraped-off yellow.
Then the ground freaked with patches of oil, and, tree-like,

a tall stack of tires black-barked with treads. The air tastes
of it, whatever it is that stains the hubcap’s bowlful of rain,

and from deep inside that heap—part Hieronymus Bosch,
part Mad Max—you can hear the ticking of some fragment

expanding as it loses its last faint bloom of warmth. Look,
all these scummy windows reply with a version of myself

in an open road afterlife—unless, of course, this is it, unless
erosion is a category of endurance, unloved and unlovely,

some old, odd scotched part—iron-gray chassis, gashed grille,
door frayed off its hinges). Better yet, you’d think all this

disbursement of nature, the weather taking metal back to its
first motive, becoming a new growth, a small rust blessing.

Carmine Starnino has published five collections of poetry, including This Way Out, which was nominated for the Governor General’s Award in 2009 and recently translated into French by Éditions Hashtag under the title Par Ici La Sortie. His most recent collection is Dirty Words:Selected Poems 1997-2016. His other books include The New Canon: An Anthology of Canadian Poetry and Lazy Bastardism: Essays & Reviews on Contemporary Poetry. He lives in Montreal, Quebec.

"Fire in the Angels" by Anne Higgins