From the Vault! “His Eyes Blazed with a Sort of Demonaic Fury, and He Suddenly Made a Grab at My Throat”: Top Five Vampires 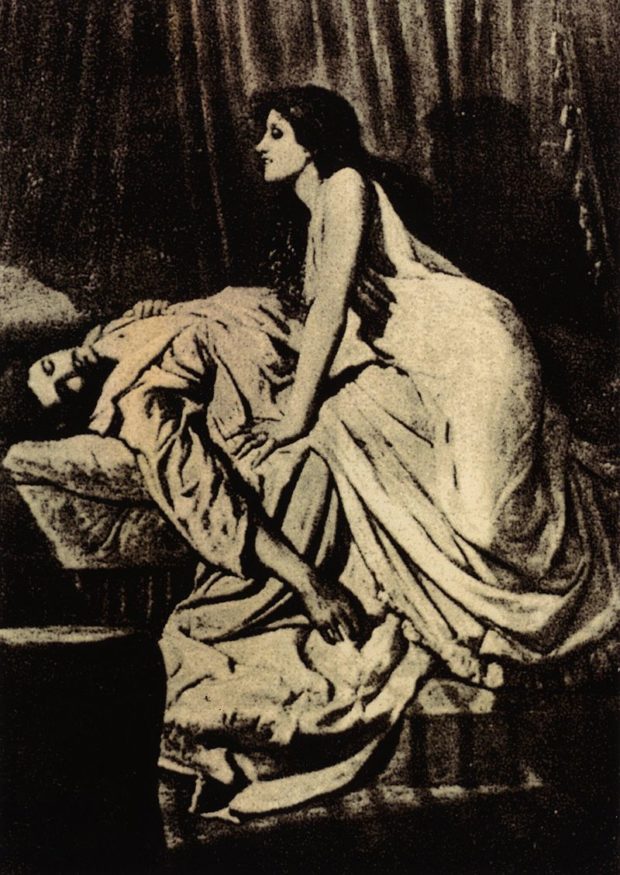 This is a tough one. There are so many vampires out there, but we’ll try to narrow it down to our favorite five, with some room for honorable mentions.

The vampire first seized the public imagination when Lord Byron published his poem “The Giaour” in 1813. John William Polidori published his short story “The Vampyre” in 1819, starring the suave British nobleman-vampire Lord Ruthven (Polidori’s story was inspired by the unfinished Byron story “The Burial: A Fragment” and Ruthven is based on the demonic character of the poet Byron himself). Beginning in 1845, James Malcolm Rymer published a sensational long Gothic novel in parts (issued one chapter at a time in pamphlet form) called Varney the Vampire; or, the Feast of Blood.

The great synthesis of vampire myths appeared in the guise of the long, rambling 1897 novel Dracula by Bram Stoker. Following the novel’s popularity, the story enjoyed considerable success on the stages of London’s West End and later New York’s Broadway, where a young immigrant actor named Bela Lugosi was discovered by a Universal Pictures scout on opening night. Lugosi was hired to play the role in the groundbreaking 1931 motion picture.

Universal’s Dracula set the tone not only for subsequent vampire movies but the entire horror genre. Dracula’s castle, with its crumbling curved stairways, candelabras, giant spider webs, long shadows, misty crypt, and other Gothic appurtenances became the standard for innumerable horror movies, comics, novels, and Halloween haunted houses. We’ve seen a lot of actors take on the role of Dracula (possibly another list?), but for the purposes of this list Bram Stoker’s Dracula is, in all his incarnations, but one of many possible vampires. Let’s get started.

5. Edward, Eric, and Damon: Impossible to ignore at this point, these are the sexy young James Dean-esque vampires from Stephenie Meyer’s Twilight books and movies, True Blood (TV series), and The Vampire Diaries (TV series) respectively.

4. “The Giaour” by Lord Byron (first vampire in English literature): After the Giaour, or nonbeliever, kills the poem’s hero, Hassan, Byron predicts that as punishment he will rise from the dead to drink the blood of his own people. Byron first learned of the legend of the vampire during his grand tour.

But first, on earth as vampire sent,

Thy corpse shall from its tomb be rent:
Then ghastly haunt thy native place,
And suck the blood of all thy race;
There from thy daughter, sister, wife,
At midnight drain the stream of life;
Yet loathe the banquet which perforce
Must feed thy livid living corse:
Thy victims ere they yet expire
Shall know the demon for their sire,
As cursing thee, thou cursing them,
Thy flowers are withered on the stem.

3. Count Orlock, otherwise known as Nosferatu: F.W. Murnau’s iconic, and still-terrifying, vampire film was a triumph of German Expressionist film-making when it appeared in 1922, fully nine years before Universal Studios’ Dracula. It starred Max Shreck (his surname means roughly “terror” in German) as Count Orlock, a hunched, ghastly figure that represents the incursion of disease and filth into the modern world from a dark, forgotten realm of the earth. He is easily the least-sexy vampire of all time, more humanoid vermin than demon lover. In 1979, German auteur Werner Herzog released Nosferatu the Vampyre (Nosferatu: Phantom der Nacht) starring madman-genius Klaus Kinski in the role of Count Orlock.

2. Count von Count: From Children’s Workshop, aka Sesame Street, performed with a Bela Lugosi-style Hungarian accent by Jerry Nelson. Controversy regarding the vampirism of the Count continues unabated. The Count suffers from an obsession with counting, known in medical circles as arithmomania.  That’s right. Count von Count! “Vunnnnn, toooooo, treeeeee, ahahaaaaahahahaaaa! It’s fun to count.” Unless one can’t stop. Then it is a terrifying death-in-life suffered for all eternity.

1. Bram Stoker’s Dracula, Vlad the Impaler: Despite many forerunners, Stoker’s Dracula is the sine qua non of vampire stories. It is the gorilla in the room for anyone writing a vampire book or filming a vampire movie. Most writers and directors attempt to play against the original book and 1931 Universal movie  monster, only to remind us of them after all. Dracula got sexy in the 70s, and gushy in the 90s, and he’s still with us, in all his creepy, charismatic glamor. Scholars have figured out that Stoker already had the book well under way before he learned of the historical figure of Vlad the Impaler (Vlad III, Prince of Wallachia 1431–1476, also known by his patronymic Dracula). This puts paid to the notion that anyone thought of poor Vlad as a vampire before his fictional recreation as an unkillable creature of the night in the hands of Stoker at the end of the 19th century.

Now, for the shadowy gallery of notable vampires who didn’t find a place on the list. This gathering testifies to the incredible influence and reach of the vampire myth in our culture. What did I  miss? Send in your own favorites.

Eli: The vampire child from the 2004 John Ajvide Lindqvist novel Låt den rätte komma in, translated into English as Let The Right One In. Later made into both Swedish and US films.

Kurt Barlow: An Austrian vampire so ancient that he predates Christianity itself, from Stephen King’s 1975 novel Salem’s Lot (his second published novel after Carrie and his personal favorite according to interviews). The “master” of all vampires, he turns up in a small town in Maine (where else?) to terrorize the local population and maybe open a cute little antiques store on the side.

Count Chocula: One of the popular monster cereals sold by General Mills. Others include the ghostly Booberry, the modern-promethean Frankenberry, the ancient Egyptian horror Yummy Mummy, and the lycanthropic Fruit Brute. Count Chocula is voiced by Larry Kenney in television commercials for the cereal, imitating Bela Lugosi’s famous 1931 turn as Dracula for Universal Pictures. He craves chocolate much in the way Dracula craves human blood. He is a truly terrifying creature.

Count Floyd: Count Floyd, adeptly played by Joe Flaherty on the sketch comedy show SCTV, is the long-suffering host of Monster Chiller Horror Theater. He is forced to introduce bad or simply unscary movies, including nature documentaries, that the clueless producers of the penniless show schedule for him to introduce. “Vow, kids . . . vasn’t it SCARY vhen the vaitress put ketchup on those french fries?” He is one of the few truly sympathetic vampires.

Blacula: The star of the cult classic 1972 American horror film from American International Pictures, directed by William Crain and starring William Marshall as an African prince who becomes a vampire while visiting Transylvania. Considered by fans to be one of the most genuinely frightening vampire films.

Lestat de Lioncourt: Narrator and principal vampire of Anne Rice’s enormously popular series of books, starting with Interview with the Vampire in 1976.

Varney the Vampire: Main character of the 1845-47 popular series by James Malcolm Rymer that ran to 220 chapters.

John: Played by David Bowie in The Hunger, the 1983 film based on Whitley Strieber’s 1981 book of the same name.

Strahd von Zarovich: The rather unimaginative Dracula-like central NPC (non-player character) from the Dungeons and Dragons Ravenloft campaign setting, which also spawned a series of novels.

And, how could I have forgotten! Just remembered on my walk back from brunch. Lily Munster, played by Yvonne De Carlo in the very likeable 1960s Addams Family ripoff, is, in fact, a vampire (possibly based on Vampira herself!).  Also, Grandpa Munster, played by Al Lewis, is Sam Vampire, Count of Transylvania.

Maila Nurmi: Finnish-American actress who played Vampira in Ed Wood’s classic schlock-horror film Plan 9 From Outer Space. More importantly, she played Vampira as the world’s first TV horror show host. She is the most famous sexy screen female vampire, though it should be noted that Dracula’s three wives were depicted as quite seductive by Bram Stoker in his novel. On another note: is Elvira a vampiress or just a witch?

1
Quincy R. Lehr's Poem “Getting Worse with Bigger Dicks”Appears in the Latest Installment of Cocytus: A Dark Web Magazine

"The Trap" by Jon Stallworthy