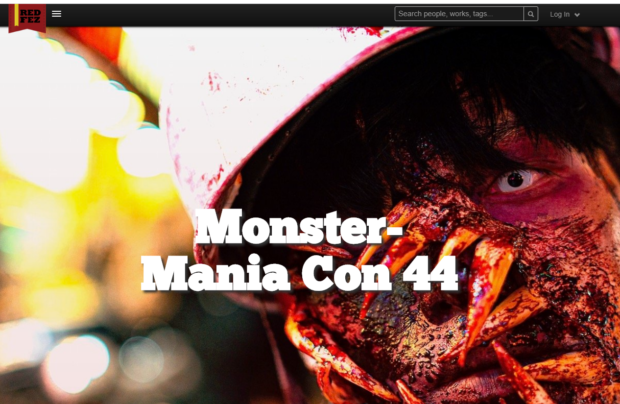 Two poems by Ernest Hilbert, “The Inlet” and Monster-Mania Con 44″ appear in issue 140 of the arts and culture magazine Red Fez. Click here to read them both over at Red Fez.

They’re here where they feel safe for once,
The plush lobby of the Crowne Plaza Hotel.

Daughters and mothers, stout and starved,
Brains bulged out of bruised skulls.

In shambolic lines up the stairs to Level Two,
Crowds flick at phones as they wait

To meet the original cast of The Thing.
T-Rexes get stuck in the revolving door.

My legs and skull, ballooned by Percocet,
Are buoyant as storms of gas on Jupiter.

My brother inches my antique wheelchair
Through the throng, my bandaged big toe aimed out

Like a spar on a polar icebreaker.
We bump the Creature from the Black Lagoon.

So much corpse paint, so many corsets
And fishnet stockings, cats-eyes contacts,

Raven hair and Victorian jewelry;
So many living-dead girls slumped like dolls,

Seams sewn along once-severed limbs,
And all the young men who grin to kill.

The obese fixed in their custom wheelchairs,
And the frightened sad glint in the eye

Of skeletal teens wondering what beasts
They can safely reach for to hug goodbye.

The cars that overflowed the lots are parked
Instead for miles along an access road.

They thin as the sun goes out behind the trees,
Until there is only a solitary rusted Toyota

Out in the gusting cold, bumper stickers
For Walking Dead and Insane Clown Posse

On the loose rear bumper, abandoned
At an angle on the snowy mud off the asphalt

Where the long-dead grass grades down
To frost that rings like wraiths a blackened lake.

"Rounding up the Mimes" by A. M. Juster