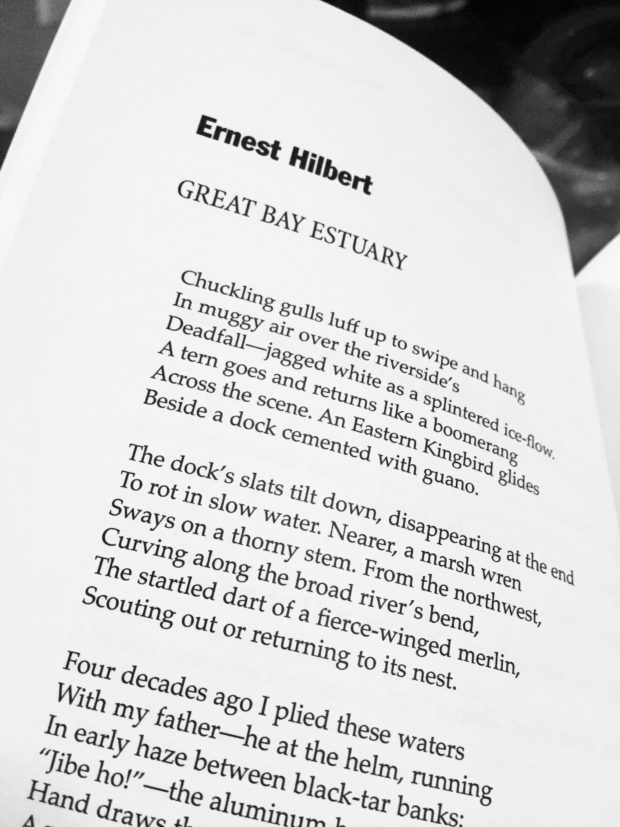 Many thanks to the editors at The Hopkins Review for publishing my poem “Great Bay Estuary” in their new issue. This is one of a number of elegies for my father that appear in the first chapter of Last One Out.

Chuckling gulls luft up to swipe and hang
In muggy air over the riverside’s
Deadfall—jagged white as a splintered ice-flow.
A tern goes and returns like a boomerang
Across the scene. An Eastern Kingbird glides
Beside a dock cemented with guano.

The dock’s slats tilt down, disappearing at the end
To rot in slow water. Nearer, a marsh wren
Sways on a thorny stem. From the northwest,
Curving along the broad river’s bend,
The startled dart of a fierce-winged merlin,
Scouting out or returning to its nest.

Four decades ago I plied these waters
With my father—he at the helm, running
In early haze between black-tar banks:
“Jibe ho!”—the aluminum boom swings as my father’s
Hand draws the tiller, the wake’s V following—
A metal rattle as my father cranks

The winch—the thrill of holding on as we heel
And the sideways world is wind and bulrush,
Ghosts of petrified white cedars standing
Apart out in the endless mud, our keel
Roiling the black bottom. In the murky hush
Of dusk, we arrive at the familiar landing . . . .

Beyond the sandy downstream knolls, behold
A summer flotilla of tundra swans.
In strobing depths beneath the broken dock,
Elegant Venetian galleys of gold-
Finned pickerel row through rays to bronze,
White perch arrowing silver around a rock

To the sun-ruled surface where stratocumuli
Loom in to warn of an advancing storm.
A sad and majestic eastern red cedar
Bushes over the brown current, berry
Clusters dusty-blue, a funerary form
Leaning to its mirror in the lessening light.

Fires smolder, far off. The ancient rough-shield
Shell of a diamondback terrapin bobs
On a soaked log sideways in the slow stream.
Scum from brackish water dims its battlefield
Polish. All that floats here—flaked bark, knobs
Of old limbs, cola cans—drawn as if in a dream

Toward the Great Bay and the sea beyond.
I lie in bed under cresting waves of wool,
Steering my ivory sloop with sails of ice
In the New Jersey sunset—a reed my wand;
Its tufts a dirty, living gold—the pull
Of memory, time-consumed sinking of sights

Once solid. The stars are out already,
And I go down where swamps sieve water shed
By the pine-stands and tangled low scrub, a sight
That gathers around the cloud-flood horizon—I see
Everything, all around, going red a while, led
To my bedside in the last of the light.