Ernest Hilbert Reviews The Missing Pages: The Modern Life of a Medieval Manuscript from Genocide to Justice by Hegnar Zitlaian Watenpaugh 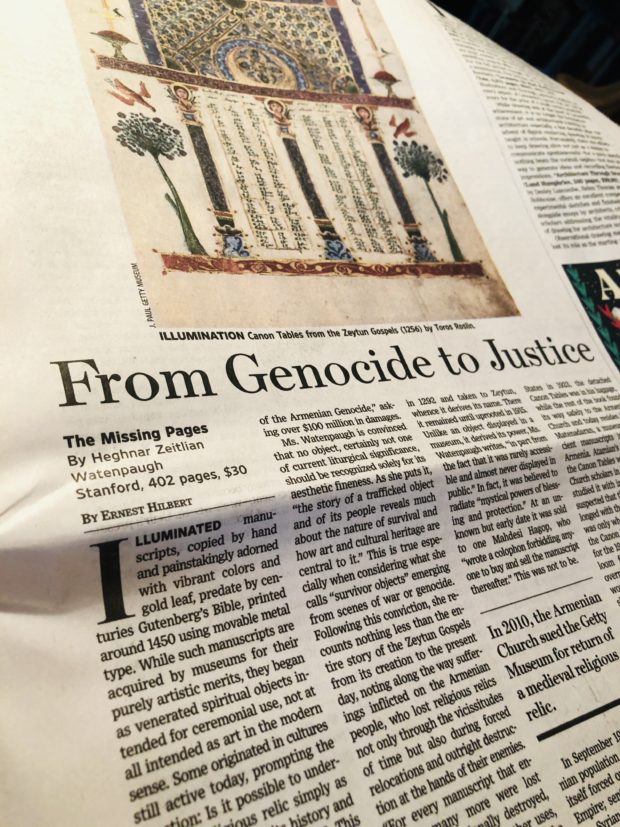 I had the pleasure of reviewing Hegnar Zitlaian Watenpaugh’s new book for the Wall Street Journal. It appears in the Saturday, November 23rd Holiday Books section.

Illuminated manuscripts, copied by hand and painstakingly adorned with vibrant colors and gold leaf, predate by centuries Gutenberg’s bible, printed around 1450 using moveable metal type. While such manuscripts are acquired by museums for their purely artistic merits, they began as venerated spiritual objects intended for ceremonial use, not at all intended as art in the modern sense. Some originated in cultures still active today, prompting the question: Is it possible to understand a religious relic simply as art, removed from its history and the culture that made it? This perilous fault line—between the cosmopolitan enjoyment of art objects removed from their histories and their use by cultures still living those histories—provides the compelling tension of Heghnar Zeitlian Watenpaugh’s “The Missing Pages: The Modern Life of a Medieval Manuscript From Genocide to Justice.”

Ms. Watenpaugh, a professor of art history at the University of California, Davis, has written a gripping, and at times unsettling, history of what is known as the Zeytun Gospels, a lavishly illuminated Armenian book that miraculously survived centuries of war, conquest and dispossession of a kind that culminated in the Armenian genocide under Ottoman Rule during World War I (and in its aftermath under the newly formed Turkish state). Although the book endured, it did not remain intact. In the early 20th century, it was shorn of its Canon Tables, the concordance detailing passages that appear in two or more of the four Gospels, a standard feature of medieval manuscripts. Those eight meticulously rendered leaves—a masterpiece of “medieval visual harmony”—were acquired by the Getty Museum in Los Angeles in 1994 after being exhibited earlier that year by the Morgan Library and Museum in New York. Sixteen years after their purchase, the museum world was rocked when the Western Prelacy of the Armenian Apostolic Church of America, acting on behalf of its mother church—the Catholicosate of the Great House of Cilicia, based in Antelias, Lebanon, outside of Beirut—sued the Getty Museum for “restitution of cultural heritage looted as a result of the Armenian Genocide,” asking over $100 million in damages.

Ms. Watenpaugh is convinced no object, certainly not one of current liturgical significance, should be recognized solely for its aesthetic fineness. As she puts it, “the story of a trafficked object and of its people reveals much about the nature of survival and how art and cultural heritage are central to it.” This is true especially when considering what she calls “survivor objects” emerging from scenes of war or genocide.

Read on at the Wall Street Journal.