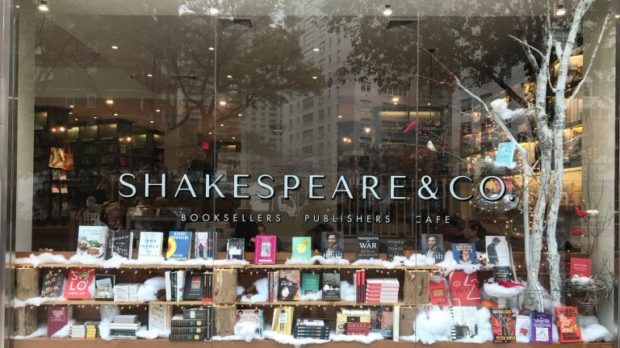 Come out to hear Ernest Hilbert and John Wall Barger read from their latest books at Shakespeare & Co. near Rittenhouse Square. The event is free and open to the public. Stop by!

John Wall Barger’s poems have appeared in APR, Rattle, The Hopkins Review, The Cincinnati Review, Pleiades, The Antioch Review, and Best of the Best Canadian Poetry. His poem, Smog Mother, was co-winner of the Malahat Review’s 2017 Long Poem Prize. His fourth book, The Mean Game (Palimpsest Press, 2019), is in its second print run. He lives in West Philadelphia and teaches at La Salle University. (johnwallbarger.com)

You have sung us down.
Middle of the island you whispered
the treasure-bearing goblin song, then howled it.
To escape the lines, some held their ears,
some gnashed their teeth, some ran,
some drowned swimming out of earshot.
There are nightmares a human enacts
which are the work of gods. Hatred swirls in the earth
like the polluted sea gyres. Some jötunn,
lonely demon craving an ally,
slid a thorn in your side deep below the ribs,
a death-in-life wound. Pawn,
you were implanted in a uterus.
Out of the Navel of Heaven you emerged,
kid with a fucked-up plan in his overalls,
scrawled by a god of war.
You were a virgin pharaoh limping the desert
in a coat of snarling dogs;
a grim princess crushing a serpent
between your fingers, gathering venom
in a bowl; a physicist haunted
by an atom humming in a microscope.
You fled to the bawds of the valley.
You appealed to the progenies of chaos.
None could remove the thorn.
One day you woke singing the hemorrhaging song,
as if it were yours; the Mein Kampf song;
the scratching-at-the-door-at-3-a.m.
song; the sandman-over-your-bed song
of the tongue-tied wound in your rib,
which choked the kid with the deaf sister
at five in the afternoon. Your song suffocated
the kid with head lice; smothered
the pumpkin pie eater; asphyxiated
the kid with the ham radio;
strangled the kid with the potty mouth;
throttled the cigarette-smoker put back a year
whose mother keeps ending up
you-know-where; gagged the girls
too young to kiss who had never kissed.
You sang us down in the sunlit forest
while golden plovers sang. You sang us down
in the fresh cut grass. Time is a bleached
jawbone wind howls through, yawning a melody.
Bodies were hauled out by searchlight.
I cannot look at the white sheets laid across them.
A few stumbled from caves, shivering,
humming the tune, petrified.
I would like to sing your magic backwards.

Ernest Hilbert is the author of Sixty Sonnets, All of You on the Good Earth, and Caligulan, which was selected as winner of the 2017 Poets’ Prize. His fourth collection, Last One Out, appeared in March 2019. He lives in Philadelphia where he works as a rare book dealer and book reviewer for The Washington Post and The Wall Street Journal. His poem “Mars Ultor” was included in Best American Poetry 2018, and his poems appear in Yale Review, American Poetry Review, Harvard Review, Parnassus, Sewanee Review, Hudson Review, Boston Review, The New Republic, American Scholar, and the London Review. Visit him at www.ernesthilbert.com

My Roman tie
Is trampled silk

Of Adriatic sunrise.
Its molten foil

Plunges in my chest.
I sit up in the dark.

I listen to Bach
And sulk.

I sink all night
Through the sun.

It holds a heavy glass glow
As I roll into black.

Cabs bank and coast
Down crazed straits below.

The floor slides
Like a raft in a tide.

The walls groan
And creak with whalesong.

We made love here,
Face down in a summer

River for hours,
Pulled toward

Softening surf
Of a warmer ocean.

Far above the city.
They perish and astound.

I am a barbarian king brooding
In long captivity.

I digest
Whole forests and their deer.

The gaped ghost O
Of neon

Over the iron balustrade
Fills the room.

My heart is a meteorite.
I am its crater.

Ernest Hilbert Reviews The Missing Pages: The Modern Life of a Medieval Manuscript from Genocide to Justice by Hegnar Zitlaian Watenpaugh