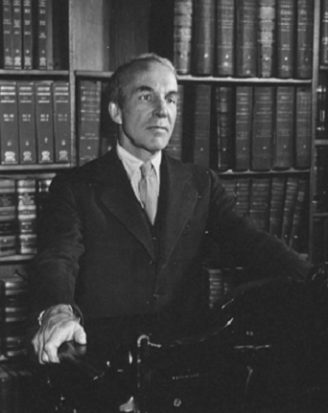 This is The Making of America in Five Panels:

This is Mister Harriman making America:
Mister-Harriman-is-buying-the-Union-Pacific-at-Seventy:
The Santa Fe is shining on his hair.

This is Commodore Vanderbilt making America:
Mister-Vanderbilt-is-eliminating-the short interest-in-Hudson:
Observe the carving on the rocking chair.

This is J.P. Morgan making America:
(The Tennessee Coal is behind to the left of the Steel Company.)
Those in mauve are braces he is wearing.

This is the Bruce is the Barton making America:
Mister-Barton-is-selling-us-Doctor’s-Deliciousest-Dentrifice .
This is he in the beige with the canary.

You have just beheld the Makers making America:
This is the Making of America in Five Panels:
America lies to to the west-southwest of the switch tower:
There is nothing to see of America but land.

THE ORIGINAL DOCUMENT UNDER THE PANEL PAINT:

Having in mind your repeated commands in this matter,
And the worst half of it done and the streams mapped,

Breaking with rain for the third spring since St. Louis,
The crows at the fishbones on the frozen dunes,

The first cranes going over from south north,
And the river down by a mark of the pole since the morning,

And time near to return, and a ship (Spanish)
Lying in for the salmon: and fearing chance or the

Drought or the Sioux should deprive you of these discoveries–
Therefore we send by sea in this writing.

Dung for the cook fires by the sulphur licks.
After that there were low hills and the sycamores,

And we poled up by the Great Bend in the skiffs:
The honey bees left us after the Osage River:

The wind was west in the evenings, and no dew and the
Morning Star larger and whiter than usual–

The winter rattling in the brittle haws.
The second year there was sage and the quail calling.

All that valley is good land by the river:
Three thousand miles and the clay cliffs and

Bear, elk, wolves, marten: the buffalo
Numberless so that the cloud of their dust covers them:

Many men will have living on these lands.
There is wealth in the earth for them all and the wood standing

And wild birds on the water where they sleep.
There is stone in the hills for the towns of a great people…”

You have just beheld the Makers Making America:

They screwed her scrawny and gaunt with their seven-year panics:
They bought her back on their mortgages old-whore cheap:
They fattened their bonds at her breasts till the thin blood ran from them.
Men have forgotten how full clear and deep
The Yellowstone moved on the gravel and the grass grew
When the land lay waiting for her westward people!

Archibald MacLeish was an American poet, journalist, public servant, and professor. He attended Yale University and enlisted for action in World War I. MacLeish later attended Harvard Law School and practiced law in Boston for a time before moving to Paris for several years to devote himself fully to poetry. He won the Pulitzer prize three times: for his epic poem Conquistador (1932), his Collected Poems (1952), and his verse play J.B. based on the Book of Job, which was a success on Broadway in 1957. In addition to writing poetry, MacLeish wrote for Henry Luce’s magazine Fortune, and, for five years, served as Librarian of Congress at the request of President Franklin Delano Roosevelt. He held multiple other positions in the Roosevelt administration, including Assistant Secretary of State for Cultural Affairs. From 1949 to 1962, MacLeish was Boylston Professor of Rhetoric and Oratory at Harvard University.

This poem is from his sequence Frescoes for Mr. Rockefeller’s City.

"Among Women" by Marie Ponsot