Donald Trump: The Magazine of Poetry 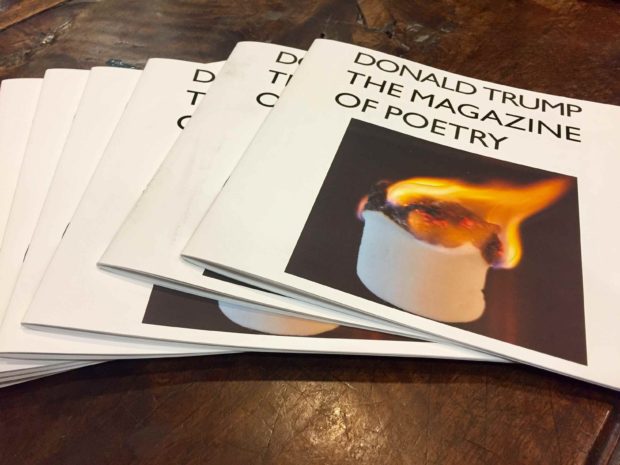 Publisher, bookseller, critic, blogger, and all-around polymath Henry Wessells is the man behind Donald Trump: The Magazine of Poetry, issued in the tradition of Ronald Reagan, The Magazine of Poetry, which was created in the 1960s by a group of science fiction writers that included J.G. Ballard and Tom Disch. Trump: The Magazine of Poetry includes my poem “Mars Ultor,” which has been read at the ongoing protests at Trump Tower. Click here to see New York bookseller Erin Mae Black reading my poem in the lobby at Trump Tower. I’m told that Eric Trump exited the elevator directly in front of her as she was reading it, so he has heard some of my verse (which is just kind of funny).

Legend has it that Wessells ignited fifty marshmallows before finding one that bore a striking resemblance to the 45th President of the United States. It does bear an uncanny resemblance. The magazine opens with a gem by Dwight D:

America is a burnt marshmallow,

brown and black at the edges,

white and squishy in the interior.

In addition to verse and prose written in response to the unlikely and entirely disorienting (when not frightening and infuriating) rise of Mr. Trump, the magazine contains art, such as this lovely portrait by Molly Crabapple: Donald Trump The Magazine of Poetry was published on Tuesday the 22nd of November, 2016, near 725 Fifth avenue in New York City. 0
"The Muse and the Auctioneer’s Gavel: Learning About Poetry from First Editions" by Ernest Hilbert
"When Will I Get to Be Called a Man?" by Big Bill Broonzy