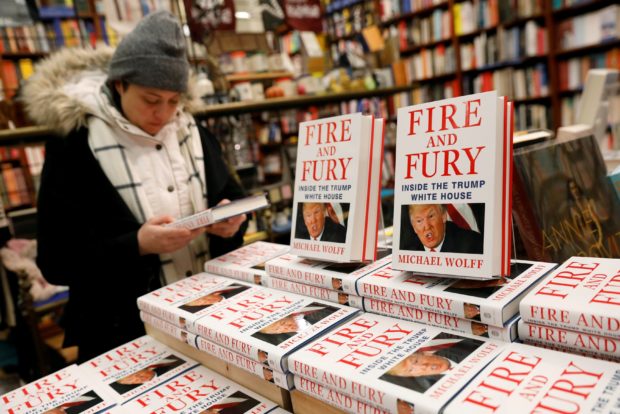 A few months ago, the book Fire and Fury by Michael Wolff, an expose of the Trump White House behind the scenes, got a lot of publicity. A few key dishy points are repeated in most of the articles about the book, for instance that the people working in the Trump White House think Trump is very stupid and Trump barely makes the effort to read anything, that he sits in his room and watches TV and eats cheeseburgers, that Trump is afraid of being poisoned, etc. You can read about those things in a lot of places, with many repetitions of the same anecdotes. I read the book and it contained a lot of material that wasn’t covered in any of the articles I read. So I pulled out some of the B-list anecdotes from the book that weren’t covered, and here are the top five of the non-top 20 facts from the book. 5. Steve Bannon and Clinton buddy/left-wing fundraiser David Geffen are friends and were vacationing together in Europe when Bannon was contacted to join the Trump team (he was brought on by his Breitbart backers, the Mercers). Their deal with the Trump camp was that they’d give the campaign a much-needed infusion of cash if Trump would consent to bring Bannon and Kellyanne Conway to the team. Conway became the official campaign manager but Bannon became the de facto campaign manager. It’s quite clear reading the book that Bannon talked with Wolff a lot, which is why the Mercers stopped funding Bannon and had him shitcanned from Breitbart after the book came out. 4. Trump said that the greater the age gap between a man and his trophy wife, the less she cares about his infidelities (Melania is 24 years younger than him). He and Melania were seldom in the same location during the course of their marriage, nor did Melania usually know where he was. Ivanka disdains Melania and ridicules her behind her back. When naked photos of Melania emerged in the spring of 2016, it was widely believed by Trump insiders that Trump was the source of the leak. 3. Steve Bannon does not use a computer. 2. White House insiders were committed to the idea that Trump was merely a bit eccentric but was solid in his knowledge and abilities, and they felt he was being unfairly targeted by the media . . . until he tweeted in March the RT-fueled tale that Obama had wiretapped him at Trump Tower during the election. That made them embarrassed for him and they realized he was a mess. No longer game to defend him, they moved into a state of quasi-incredulity and sheepishness when necessary to defend Trump. 1. There was a large power struggle behind the scenes between “Jarvanka,” Reince Priebus, and Steve Bannon. Gary Cohn, who keeps out of the public eye for the most part, seems to have a more central role in the White House, on Team Jarvanka. While Bannon and Priebus couldn’t stand each other, they banded together against Jarvanka. Bannon was finished early on, but the Mercers’ influence kept him from being fired for many months. Thus Priebus was kicked out before Bannon, but Bannon ultimately followed, leaving Kellyanne Conway as the Mercer’s main person in the White House.

0
"The Woman Turns Herself into a Fish" by Eavan Boland