“At the Franciscan Retreat Center, Colorado Springs” by Daniel Klawitter 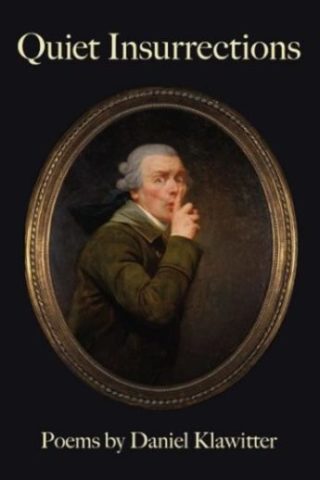 As the deer pants for streams of water,
so my soul pants for you, my God. –Psalm 42:1

A congregation of devout deer
appeared over the hill
and came down to graze
on a Eucharist of leaves:

Initially, there was no rapture
just a rupture in my reverie.

It didn’t seem to bother them though:
the smoke. They must have known
I wasn’t a wildfire.
Just another man sacrificing himself
in the wilderness.

And then, with magnificent tenderness,
one of the deer got so near to me…
20 feet or less. We were now
in the same sanctuary of grass.

For some reason I looked away and
stretched out my left hand
thinking: “This too shall pass.”
But it did not.

The deer approached without fear
his black nose nuzzled
my palm, the nostrils flaring.

And that was it.
Who blessed who I don’t know.
But he left as gentle
as a penitent.

Among other things, Daniel Klawitter has been an actor, a labor rights activist, the lead singer/lyricist for the Indie rock band Mining for Rain, and a poetry book reviewer for NewPages.com. His poems have appeared widely in journals and magazines, both online and in print, in Australia, the UK, and the U.S. Daniel has a BA in Religion Studies with a minor in Theater Arts from the College of Santa Fe and a Master of Divinity degree with a justice and peace studies concentration from The Iliff School of Theology in Denver. A member of the Colorado Poets Center, he is the author of two full-length poetry collections: A Poet Playing Doctor (2015) and Plato Poetica (spring, 2017), both published by White Violet Press, as well as a chapbook of children’s poems entitled Put on Your Silly Pants: Poems for Children and Very Immature Adults (Daffydowndilly Press/Kelsay Books, fall, 2016) which won Honorable Mention in the 2017 Purple Dragonfly Book Awards for Children’s Poetry. You can read more about Daniel at: poetdanielklawitter.wordpress.com

Ashley Anna McHugh's New Poem "The Rite of Spring" appears in the latest installment of Cocytus: A Dark Web Magazine