“An Excerpt from ‘American Letter'” by Archibald MacLeish 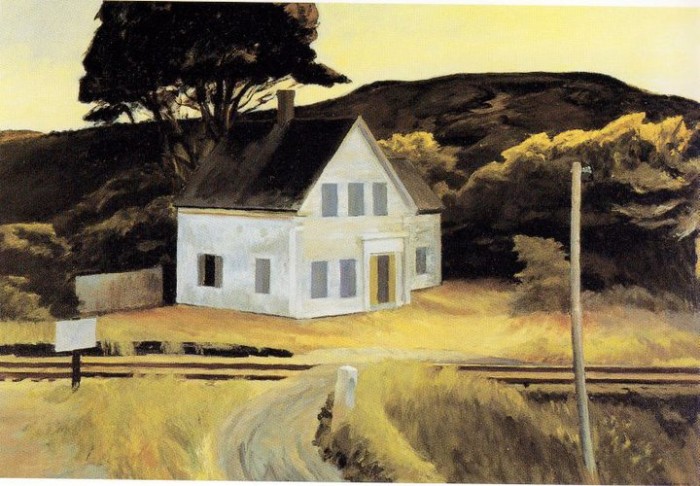 It is a strange thing— to be an American.
Neither an old house it is with the air
Tasting of hung herbs and the sun returning
Year after year to the same door and the churn
Making the same sound in the cool of the kitchen
Mother to son’s wife, and the place to sit
Marked in the dusk by the worn stone at the wellhead—
That— nor the eyes like each other’s eyes and the skull
Shaped to the same fault and the hands’ sameness.
Neither a place it is nor a blood name.
America is West and the wind blowing.
America is a great word and the snow,
A way, a white bird, the rain falling,
A shining thing in the mind and the gulls’ call.
America is neither a land nor a people,
A word’s shape it is, a wind’s sweep—
America is alone: many together,
Many of one mouth, of one breath,
Dressed as one— and none brothers among them:
Only the taught speech and the aped tongue.
America is alone and the gulls calling.

It is a strange thing to be an American.
It is strange to live on the high world in the stare
Of the naked sun and the stars as our bones live.
Men in the old lands housed by their rivers.
They built their towns in the vales in the earth’s shelter.
We first inhabit the world. We dwell
On the half earth, on the open curve of a continent.
Sea is divided from sea by the day-fall. The dawn
Rides the low east with us many hours;
First are the capes, then are the shorelands, now
The blue Appalachians faint at the day rise;
The willows shudder with light on the long Ohio:
The Lakes scatter the low sun: the prairies
Slide out of dark: in the eddy of clean air
The smoke goes up from the high plains of Wyoming:
The steep Sierras arise: the struck foam
Flames at the wind’s heel on the far Pacific.
Already the noon leans to the eastern cliff:
The elms darken the door and the dust-heavy lilacs.

It is strange to sleep in the bare stars and to die
On an open land where few bury before us:
(From the new earth the dead return no more.)
It is strange to be born of no race and no people.
In the old lands they are many together. They keep
The wise past and the words spoken in common.
They remember the dead with their hands, their mouths dumb
They answer each other with two words in their meeting.
They live together in small things. They eat
The same dish, their drink is the same and their proverbs.
Their youth is like. They are like in their ways of love.
They are many men. There are always others beside them.
Here it is one man and another and wide
On the darkening hills the faint smoke of the houses.
Here it is one man and the wind in the boughs.

This is our race, we that have none, that have had
Neither the old walls nor the voices around us,
This is our land, this is our ancient ground—
The raw earth, the mixed bloods and the strangers,
The different eyes, the wind, and the heart’s change.
These we will not leave though the old call us.
This is our country-earth, our blood, our kind.
Here we will live our years till the earth blind us.